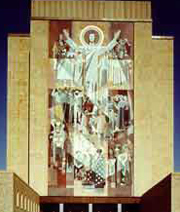 It doesn’t look a day over 39, but a familiar sight on the Notre Dame campus has hit the big 4-0, marking four decades as one of the University’s most celebrated landmarks.p. The “Word of Life” mural on the Hesburgh Library, commonly known as “Touchdown Jesus” because of the raised position of Christ’s arms and its location directly behind the north end zone of the football stadium, was unveiled May 7, 1964, at the library’s formal dedication (the building had opened without fanfare the previous year). The mural has stood the test of time, and today is one of the nation’s most recognizable collegiate monuments and a main attraction for visitors to campus.p. Designed by artist Millard Sheets, the mural measures 134 feet high and 68 feet wide, and is composed of some 6,700 individual pieces of granite that form 324 panels. As suggested by Rev. Theodore M. Hesburgh, C.S.C., president emeritus of Notre Dame, the mural’s theme incorporates saints and scholars throughout the ages.p. “It’s like a kaleidoscope of personalities that make up the history of Christianity and pre-Christianity as well. It’s very rich philosophically and theologically,” Father Hesburgh said.p. Inspired by a passage from the first chapter of John’s Gospel, the mural depicts Christ the Teacher amid images of prophets and historical figures in Christianity in ascending order, with classical and Old Testament scholars near the bottom and Byzantine, Medieval and Renaissance figures at the top. A team of workers constructed Sheets’ creation, under the careful direction of the artist, using granite in more than 140 colors from 16 foreign countries and 11 states.p. “Granite, of course, is one of the hardest stones there is,” Father Hesburgh said of the mural’s durability. “The climate here is abominable at times and no one could say that it would last. The amazing thing is that it’s lasted this long and it’s kept the richness of its color.”p. Its structural endurance is due in part to some strategic engineering – a space that the builders intentionally left between the mural and the library itself, which allows the mural to expand and contract during changing seasons. Renovation specialists gave the mural a $280,000 “face-lift” in the summer of 1994.p. However, its longevity as a symbol of Notre Dame’s rich spiritual and academic tradition can only be attributed to the legions of visitors and year-round members of the Notre Dame community who continue to hold the image in the highest regard and spread the word about its significance to family, colleagues and fans.p. Of course, the fact that a nationwide television audience catches a glimpse of the mural during network football broadcasts also contributes to its popularity. It was not the original intention for the “Word of Life” to become an athletic metaphor, but most agree that the mural’s status in popular culture is a pleasant fringe benefit.p. “Thinking of this as Touchdown Jesus was just not in my mind, or anybody else’s for that matter,” Father Hesburgh remembers. “And it’s become a kind of nice, friendly familiar name for this beautiful piece of art.”p. To watch a streamed video presentation about the “Word of Life” mural, visit http://opac.nd.edu/content.cfm?topicId=228 on the Web.p.