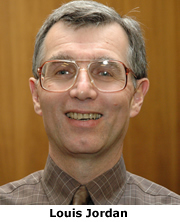 Stamps are not for me,mused Louis Jordan some 15 years ago.But I kind of like coins.And so began one mans journey from librarian to currency expert.

Though he protests being labeled a numismatist, even a brief conversation withJordan, head of the University Librariesspecial collections and the Medieval Institute Library at Notre Dame, reveals his wealth of currency knowledge.

A medievalist by study,Jordanbecame responsible for the librarys special collections after a departmental restructuring in 1992 and was taken aback by the Universitys extensive collection of coins and paper currency from around the world. Many of the pieces dated to an anonymous donation in 1887, while material and financial gifts from Robert H. Gore Jr. rounded out the collection.

Jordan, who collected coins as a boy but ceased in college due toobvious financial concerns,quickly became fascinated with the history contained in the numismatic holdings. Notes personally engraved and printed by Benjamin Franklin sat side by side with Spanish gold recovered from sunken pirate ships, all hidden away in the basement vault of the Hesburgh Library.

But with his collecting days far behind him, it was not the coins and bills that captivatedJordans historical mind – it was their stories.

A bill printed by Paul Revere in June 1776 showed a soldier holding a scroll of the Magna Carta. When that same tender was re-printed just six months later, the minuteman was pictured clutching the Declaration of Independence. Even the numismatically challenged can appreciate this visual history lesson.

George Washington mentioned a half dime from 1772, one of the first 2,500 coins produced by the U.S. Mint, in his fourth Annual Address. Numismatic folklore dictates that these coins were cast from the first presidents personal silverware collection.

How couldJordanmake these treasures available to the public? The answer came in the form of what was then an emerging new technology – the Internet.

Historical information and digital images of some of the most exclusive coins, bills and tokens in Notre Dames collection were posted online. The original Web site received so much traffic that it was soon replaced with the current incarnation ( http://www.coins.nd.edu/ ).

As one can imagine, photographing the collection and preparing the Web pages is a painstaking task, andJordandoes the majority of the work personally. In fact, the success of the site actually has slowed his progress in updating it to a database format.

International exposure via the Web keeps the collections caretaker busy as a walking reference book.I receive requests [regarding our currency] from all over the world on a daily basis,Jordansaid.

The Federal Reserve Bank has phoned for images, as has the U.S. Mint inPhiladelphia. Questions from elementary and secondary teachers are common, but the query from the Smithsonian Institution admittedly surprisedJordan. The collection garnered some discreet fame in 2006 when a note printed by Benjamin Franklin was featured on a U.S. Postal Service stamp commemorating the 300 th anniversary of his birth.

The Library of Congress recently selected the Web site for inclusion in its National Digital Information Infrastructure and Preservation Program. In response to the burgeoning amount of significant content that is created only in a digital form, such as coverage of presidential elections and the September 11 terrorist attacks, the exclusive program cannot be applied for.

Though he still pictures himself as a historian and librarian, Jordan is one of 200 fellows of the American Numismatic Society and is author of a book on the history ofMassachusetts17 th century mint.

As it turns out, these numismatic pursuits are just as enlightening as his scholarly studies of texts from the ancient Greeks and manuscripts from the Biblioteca Ambrosiana.Jordanroutinely helps colonial specialists, economic historians and legal scholars discover information in the Notre Dame collection that is not available anywhere else.

HarvardLawSchoolnever calls to use our books, because they already have a copy,he explains.But they do call to look at our currency.

Even if every book in the world is available through electronic media, special collections such as the numismatic holdings remain a unique contribution to scholarship that set a library apart from all other institutions.

In fact,Jordanbelieves that Notre Dames special collections not only increase its academic presence but are also a gift to all of society.

Part of a universitys role is preserving the past for the people of the future,he explains.

These echoes of the past are the true riches thatJordanenthusiastically shares. And while collectors will always attempt to appraise obsolete currency, Notre Dames numismatic collection provides stories that are priceless.