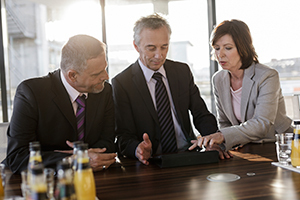 A new study by a team of researchers from the University of Notre Dame’s Mendoza College of Business has found that a tool many boards of directors use to encourage CEOs to pursue high-risk initiatives may often lead to more product safety problems.

Adam J. Wowak, Michael J. Mannor and Kaitlin D. Wowak of Mendoza’s Department of Management point out that CEOs are assumed to have a natural tendency toward risk aversion, which stems from a desire to avoid the substantial personal losses, including their income, reputation and job, that can result from risky initiatives. In order to counterbalance this tendency, boards of directors have used stock options to as a means of motivating CEOs to pursue higher-risk initiatives with the potential to increase shareholder wealth.

However, Wowak, Mannor and Wowak found that abundant stock option pay for CEOs generally increases the likelihood of experiencing product recalls in the future.

“Specifically, we found a positive relationship between the proportion of CEO pay consisting of stock options, measured over a two-year period, and the occurrence of product recalls in the subsequent year,” said Adam Wowak, the study’s lead author. “Our results are consistent with prior research showing that option-heavy pay arrangements engender aggressive risk-taking by CEOs, who stand to benefit greatly from future increases in share prices but lose nothing if share prices fall.”

The researchers theorized that higher levels of stock option pay would cause CEOs to favor aggressiveness over thoroughness in their decisions, a consequence of which would be a higher likelihood of mistakes in the design, production and distribution of products.

“This isn’t to say that CEO options are always the culprit when product recalls occur, but our findings suggest that recalls can potentially be an unintended consequence of using options to motivate risk-taking in CEOs,” Adam Wowak said.

Wowak, Mannor and Wowak analyzed product recall data on a multiyear sample of 386 CEOs of FDA-regulated public companies over the period 2004 to 2011. The firms in their sample thus faced similar regulatory environments, but varied widely in both their product recall activity (many experienced zero) as well as in their CEO pay arrangements.

“Because we tracked our sample companies over multiple years, we were able assess how CEO option pay proportion (based on the value at granting) influenced recall activity in subsequent years,” Adam Wowak said.

The researchers found that the link between options and product recalls was strongest for CEOs who hadn’t been in their positions for very long, whereas longer-tenured CEOs weren’t as susceptible to their effects.

“CEOs typically become more conservative, as opposed to daring, as they advance in their tenures, which we theorized would somewhat dampen or offset the risk-inducing properties of options,” Adam Wowak said. “We also found that founder-CEOs were more or less immune from options’ effects, which is consistent with the notion that founders may be more motivated by an intrinsic desire to protect their companies than by an extrinsic desire for large financial payouts.”

Adam Wowak points out that boards appear to have already recognized the potential pitfalls of options, as option pay as a proportion of CEO total pay has decreased significantly from the early 2000s, when options represented around 50 percent of total pay to the present, when the number is probably closer to 15 percent to 20 percent.

“In place of options, companies have increasingly used restricted stock grants, which consist of company shares that transfer to the CEO only after certain requirements are met, such as remaining in the position for several more years, meeting specific performance targets, etc.” Adam Wowak notes. “Although we didn’t examine the effects of restricted stock, it arguably offers a more balanced tradeoff between upside and downside outcomes, as stock-owing CEOs actually stand to lose money when risky actions backfire. Alternatively, making a CEO hold on to the stock for several years after exercising an option could also generate a more balanced view on risks and rewards.”

The study appears in the Strategic Management Journal. It can be found here.