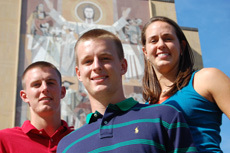 Tara Enzweiler and her brothers Thomas and Matthew all graduated with the top honors as the valedictorians of their respective classes from Cardinal Gibbons High School, the Catholic college prep institution in Raleigh, N.C.

The academically and athletically competitive siblings couldn’t bear to let their rivalry die after high school. All three now are enrolled at the University of Notre Dame.

In 2006, Tara, who also was Cardinal Gibbons’ female athlete of the year, was accepted to Notre Dame and now is a senior starting middle blocker on the Irish volleyball team. In 2007, Thomas followed his sister to South Bend and is a junior electrical engineering major. In August, Matthew completed the trifecta when he arrived at Notre Dame as a first-year student.

“We are incredibly proud of them,” said their mother, Mary Ann Enzweiler. “As witnesses and participants to the many pressure-filled late nights, I can honestly say they never took their eyes off the prize.”

Thomas chose Notre Dame over Duke University and the U.S. Naval Academy, while Matthew was accepted to Georgetown and Villanova Universities and Boston College. He decided on Tara’s birthday in April that he was coming to Notre Dame, which for her was “the best present I received.”

“I fell in love with the campus when I visited Tara her freshman year,” Matthew said. “The fact that my brother and sister are established here is something I view as a safety net.”

Still, the competition rages on. Tara and Matthew both are majoring in science-business, and last year Tara and Thomas tried to outperform one another in two shared courses.

“It was pretty cutthroat,” said Tara, who is in the process of applying to veterinary schools and hopes to become a small animal surgeon. “I don’t think our family competition will ever truly end, but I would honestly do anything to help my brothers succeed. They are my best friends and they have definitely helped motivate me through the years.”

Thomas, who plays inter-hall sports and has served as commissioner in Stanford Hall, feels similarly.

“I never felt like I was trying to out-do my sister,” he said. “She set the bar at a high level in both academics and athletics and we tried to match her success. Our sibling rivalry developed from years of playing together, from sports to board games. It is only natural that it carried over into our school work. However, as much as I have always wanted to best them, some of my happiest moments have been celebrating my siblings’ successes.”

And there have been plenty.

“My dad has always said that report card day is one of his favorite days of the year,” Tara laughed.

She led Cardinal Gibbons to a trio of appearances in the state volleyball championship, including victories in 2003 and 2005, and finished as the school’s all-time leader in career kills and second in blocks. Cardinal Gibbons retired her No. 16 jersey as she joined the Notre Dame class ranked by Volleyball Magazine and PrepVolleyball.com among the top five groups in the country.

On top of earning nearly perfect grades in high school, all three Enzweilers were members of the National Honor Society; in fact, Tara and Thomas simultaneously served in leadership positions. All three played multiple sports and Tara played flute in the band, while the boys were involved in numerous clubs, including those for philosophy and French.

“Our parents have always provided positive reinforcement to each of us,” Matthew said. “They push us to do our best, but never placed importance on gaining notoriety.”

Matthew, who currently is attempting to play as a walk-on for Notre Dame’s lacrosse team, plans to pursue community service opportunities on campus and to follow Thomas’ lead in inter-hall sports for Dillon Hall.

Meanwhile, Cardinal Gibbons has not forgotten the Enzweilers, as the fourth and final sibling, Luke, currently is a sophomore and rising basketball and lacrosse star who hopes to continue the family trend. Mary Ann says her youngest son, although proud of his siblings, is appreciative of the age gap.

Who can blame him?