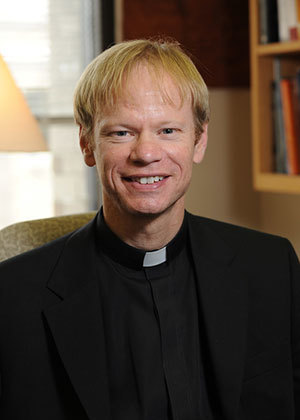 Rev. Robert Dowd, C.S.C., assistant professor of political science at the University of Notre Dame, is a fellow of the Kellogg Institute for International Studies and director of its Ford Family Program in Human Development Studies and Solidarity. A popular teacher and scholar of religion’s impact on development and political institutions, he has conducted extensive research on communities and societies throughout Africa. His recently published book, “Christianity, Islam and Liberal Democracy: Lessons from Sub-Saharan Africa;,” provocatively argues that religious diversity in Nigeria and other African countries actually encourages, rather than inhibits, religious tolerance.

How would you describe your research, scholarship, and teaching?

Much of my research focuses on trying to understand how and why religious ideas are applied to politics in the way they are. What explains why some religious leaders choose to apply their religious traditions in ways that discourage rather than encourage political participation and social tolerance? What explains why people in the religious communities follow or do not follow the political prescriptions that their religious leaders issue? My geographic region of expertise is sub-Saharan Africa, and I have conducted most of my fieldwork Kenya, Uganda and Nigeria.

I love teaching and I devote much of it to working with students to reject overly simplistic and unsupported notions of how religion and politics are related. I try to encourage students to take up the difficult questions for which we do not yet have good answers and to think critically about the world around them. I try to encourage them to generate new ideas and to think about the practical implications and policy relevance of those ideas. In essence, the question I want to address with them is, “How can we cultivate conditions that make it likely that religion will be a constructive and peaceful force in the world?”

Your recent book argues that religious diversity can help promote and sustain, rather than thwart, liberal democracy. How, from what you’ve learned in your studies of African societies, does it do so?

The conventional wisdom is that religious diversity makes interreligious competition and conflict more likely in the developing world, and this is bad for political stability, not to mention liberal democracy. However, I do not find that sub-Saharan Africa’s most religious diverse and integrated settings are the most conflict-prone. In fact, based on survey research, in-depth interviews and narrative accounts of events over the past several decades, I find that Christian and Islamic communities were more encouraging of actions and attitudes conducive to liberal democracy in sub-Saharan Africa’s more religiously diverse and integrated settings than in the region’s more religiously homogeneous or segregated settings.

What do you think are the implications of what you’ve found for American foreign policy?

I propose that policymakers would do well to support carefully thought out measures to promote religious integration. We might find appropriate ways to support efforts to pass and enforce laws that open the way for geographic territories to become more religiously diverse and integrated. We might also support efforts to make public schools and other institutions, like the military, more religiously integrated. Further, I think there is great work going at the grassroots that deserves to be highlighted.

All too often, those who promote religious intolerance grab all the headlines. In countries like Nigeria and in other countries within and beyond sub-Saharan Africa, there are Christian and Muslim religious leaders who are working hard to bring Christians and Muslims together and create a culture of mutual respect. Their efforts deserve our attention and support.