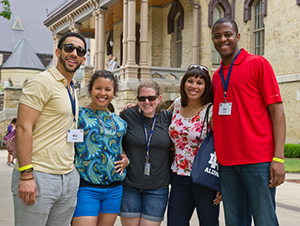 Thousands of University of Notre Dame alumni are traveling back to campus this weekend to share old memories and create new ones during Reunion 2015. Coming off of a record-breaking attendance of 3,900 alumni and their guests last year, expectations for the Thursday-Sunday (June 4-7) event are high.

“We are pleased to welcome back classes ending in 5 and 0, as well as law and graduate business students and members of our black alumni group,” Dolly Duffy, executive director of the Notre Dame Alumni Association, said. “Whether it has been decades or just a few years since their graduation, reunion attendees are some of our most ardent and supportive. Their energy during the weekend always proves to be contagious."

More than 300 members of the class of 1965 will be returning for their induction into the 50-Year Club. Meanwhile, with more than 375 members already registered to make the trip back to South Bend, the class of 2010 seeks to break the record for participation in the five-year reunion. The five-year record was broken in 2013, and then again last year.

During the weekend, alumni will be able to hear from University administrators. Rev. John I. Jenkins, C.S.C., University president, will lead an All-Class Mass and Program. Attendees will have the opportunity to directly engage with University leaders on key initiatives and future plans for Notre Dame during a University Leaders Forum featuring John Affleck-Graves, executive vice president; Erin Hoffmann Harding, vice president for student affairs; and Rev. William M. Lies, C.S.C., vice president for mission engagement and church affairs.

This will be the first reunion since the passing of Rev. Theodore M. Hesburgh, C.S.C., the University’s president from 1952 to 1987, who died Feb. 26 at age 97. Reunion attendees will be able to explore his remarkable life and honor his enduring legacy during “Stories of Father Ted,” an event focused on shared memories about the longtime leader. At the conclusion, the group will pilgrimage to Father Hesburgh’s gravesite, weather permitting.

From panel discussions on the economy to the 70-year anniversary of the admission of the first African-American student, attendees will have numerous opportunities to revisit the classroom. Other seminar topics include career transitions, Pope Francis, college savings and the importance of Catholic schools, among others.

But the weekend is also about taking time to relive old memories and traditions and have fun. Attendees have expanded entertainment opportunities this year, including a Go Irish Concert featuring Irish music and performers; the Laughing Irish Comedy Show hosted by four alumni who are professional comedians; and a new live stage outside the Eck Center where alumni will share their favorite Notre Dame experiences. The stage will feature Friday interviews with three members of the class of 1965: Heisman Trophy winner John Huarte, entrepreneur Edward Ojdana and Dr. James Muller, co-founder of Physicians for the Prevention of Nuclear War, the organization that won the 1985 Nobel Peace Prize, all celebrating their 50-year reunion.