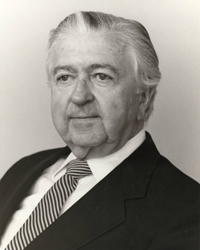 Thomas P. Carney, chairman emeritus of the University of Notre Dame’s Board of Trustees, died Monday (Dec. 7) after a long illness. He was 94. “Tom Carney was a great scientist, a great humanist, a great administrator and a great friend,” said Rev. Theodore M. Hesburgh, C.S.C., Notre Dame’s president during Carney’s years on the Board. “The Notre Dame family, of which he is so treasured a member, will always remember him with gratitude, respect and love.” Born in 1915 in DuBois, Pa., Carney was graduated from Notre Dame in 1937 with a bachelor’s degree in chemical engineering, his $345-per-semester tuition paid from the savings of his father, a railroad inspector, his three maiden aunts and two bachelor uncles. “They had all said it was Notre Dame or nothing,” he once recalled, adding that “it was so uncommon for people from DuBois to go to college that a lot of people from the town went down to the train station to see me off.” Among his Notre Dame teachers was Rev. Julius Nieuwland, C.S.C., the inventor of the formulae for synthetic rubber, in whose odoriferous laboratory on the second floor of the Chemistry Building Carney later remembered becoming so comfortable that “it convinced me it was not necessary to have oxygen to live.” After graduation, that comfort level sustained Father Nieuwland’s apprentice through the pursuit of master’s and doctoral degrees in organic chemistry from Pennsylvania State University and post doctoral research in medicinal chemistry at the University of Wisconsin. From the academy, Carney went to the pharmaceutical industry, working in all its phases for Eli Lilly in Indianapolis and G.D. Searle in Chicago. Before founding Metatech in 1976, he spent more than 35 years in research, development, planning, operations and administration, working in and presiding over laboratories in which numerous patented antihistamines, antibiotics, anticonvulsants, barbiturates and other drugs were developed. He himself held numerous pharmaceutical patents. He also wrote widely on all dimensions of his chosen field and published three books, “Laboratory Fractional Distillation,” “Instant Evolution” and “False Profits.” Throughout his life, Carney was deeply engaged in the affairs of his alma mater. In addition to being a generous Notre Dame benefactor, he served as president of the Alumni Association, founded the Alumni Senate, led fund-raising projects and campaigns, and sat on the advisory councils of the Colleges of Science and Engineering. Elected to the University’s Board of Trustees in 1967, he served as its chairman from 1982 to 1986. Among several other Notre Dame honors, Carney received an honorary degree from the University in 1969, and, with his wife, Mary Elizabeth Carney, was awarded its highest honor, the Laetare Medal, in 1986. Preceded in death by his wife, who died in 2006, Carney is survived by his four children, all Notre Dame graduates, Thomas Jr., of Lake Forest, Ill.; Sheila Hopkins of Hingham, Mass.; James of Brooklyn Park, Minn.; and Janet O’Brien of Glenview, Ill.
Funeral services will be held Dec. 14 (Monday) at Our Lady of Perpetual Help Church, 1123 Church St., Glenview, Ill., with a visitation beginning at 9:15 a.m. and Mass at 10 a.m. The Carney family has requested that, in lieu of flowers, donations be made to the Thomas P. Carney Sr. Scholarship Fund; c/o Notre Dame Club of Lake County, 11 Kensington Dr., Lincolnshire, IL 60069