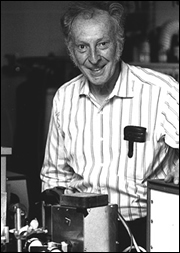 J. Kerry Thomas, the Julius A. Nieuwland Professor Emeritus of Chemistry and Biochemistry at the University of Notre Dame, has been elected a fellow of the Inter-American Photochemical Society for his achievements and contributions to the photochemical sciences.

Thomas joined the Notre Dame faculty in 1970 after having developed the short-pulsed nanosecond laser and pulse radiolysis technique at Argonne National Laboratory. He studied the fundamental chemical processes induced by radiation with these techniques.

Thomas applied pulsed photochemical methods to investigate reactions at interfaces, and to describe the nature of the interfaces themselves. He established many of the original concepts used in this fast-growing field of reactions in organized and constrained media with its many applications to storage of energy, biokinetics and catalysis.

Thomas is a member of the American Chemical Society and a fellow of the Royal Society of Chemistry, the Photobiology Society, and the Society for Radiation Research. He has served on the editorial board of the Journal of Radiation Research and presently serves on the editorial board of Chemical Physical Letters. He is a past chairman of the Gordon Conference in Radiation Chemistry and the Gordon Conference on Micelles and Macromolecular Catalysis.

The Inter-American Photochemical Society promotes and disseminates knowledge and development of photochemistry and allied subjects throughout theAmericas.