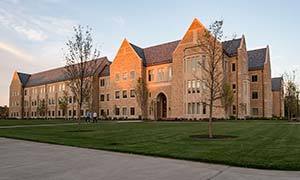 McCourtney Hall is a big building that is expected to make a big impact on Notre Dame’s future.

Construction on the building began in the summer of 2014 and ended shortly before the start of the 2016-2017 school year. At 220,000 square feet, the facility is the first dedicated research building to be constructed in a planned larger East Campus Research Complex. The research quad will create, for the first time at Notre Dame, a space for highly collaborative, state-of-the-art research that crosses the Colleges of Science and Engineering.

“McCourtney Hall creates a great opportunity for the research programs in science and engineering at the molecular scale at Notre Dame,” says Robert Bernhard, vice president for research. “The building is designed as a collaborative and adaptive space to encourage cross-disciplinary research interaction along the entire continuum of basic and applied research. We look forward to the exciting new research that will result from the collaborations that McCourtney Hall will enable. We expect the building to be a game-changer for science and engineering research at Notre Dame and a popular gathering place for collaborative research discussions for students and faculty.” 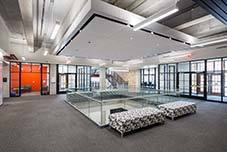 McCourtney Hall will support research space needs within the molecular sciences, including chemical and biomolecular engineering and chemistry and biochemistry.

Mary Galvin, the William K. Warren Foundation Dean of the College of Science says, “McCourtney Hall is strengthening our collaborative research capabilities in many areas including materials, the environment and health. This new space is fueling a growth in research that will help Notre Dame make an impact in the world.”

Within the three-story building, there are two wings, a central core for faculty offices and conference rooms, and some 100,000 square feet of open laboratory and team spaces. The open floor plan, lounge area and research neighborhoods of McCourtney Hall have the potential to turn chance encounters into significant advances in research.

McCloskey Dean of Engineering Peter Kilpatrick says he’s heard nothing but positive comments from the faculty and students about the facility’s design. “They love everything about it — the open labs, the interaction space, the functionality of the building. The common areas are very conducive to conversation,” he says.

“It’s very difficult for a single investigator to make a breakthrough,” says Kilpatrick. “The constant battle you fight is getting hunkered down into silos. You need a team working on a common project. You need diversity of thought at all levels. This model will be very important for the future of Notre Dame.”

A dedication for the building is scheduled for Oct. 28.

What is the job of a rector? “In Student Affairs parlance, I’d be ‘the pastor of a hall,’” says Sr. Mary Donnelly, O.P., rector of Flaherty Hall.

In reality, Donnelly acknowledges, she wears many hats.

“My role is to be with the team and for the women,” she says. “Maybe there’s a clogged toilet, or someone’s mom died, or we talk about the choices they made over the weekend. I have the privilege and honor of being invited into their lives and help them navigate life and grow more fully into the person God created them to be.”

Donnelly’s colleague and rector of the neighboring Dunne Hall for men agrees that there are many facets to their roles.

“I’m a listening ear when they going through hard times, a cheerleader when they’re doing great. I enforce the rules and help them succeed,” says Rev. Matt Kuczora, C.S.C. “I tell parents our jobs in their children’s lives are very similar — except I don’t have to pay tuition.”

For the 2016-2017 school year, there’s another hat that both Donnelly and Kuczora are wearing as they help their residents adjust to life in brand-new halls that are also on a new side of campus. 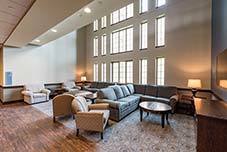 Dunne Hall for men and Flaherty Hall for women opened in August, the first new residence halls built since Ryan Hall in 2009.

They’re located in the northeast quadrant of the campus, near the new McCourtney research facility and the Hesburgh Library. Dunne Hall is just north of Flaherty Hall. Construction on the buildings began in the spring of 2015. The halls provide accommodations for 226 women in Flaherty Hall and 221 men in Dunne Hall.

For many of the women of Flaherty Hall, moving into their new home was bittersweet, as it meant saying goodbye to their former community of Pangborn Hall.

“The transition went much smoother than I thought it would,” Sr. Donnelly says. “Once they got here, the beauty of this place helped mitigate some of their anxiety. We don’t want to forget Pangborn, but we also don’t want to make this Pangborn 2.0. This is an opportunity to create something new. It’s a big challenge and a big opportunity.”

Although not mirror images of each other, both Dunne Hall and Flaherty Hall have the same footprint, approximately 71,000 square feet. Student rooms include singles, doubles, quads and, in Dunne Hall, six-person rooms. Half of each first floor will be devoted to community spaces, centered around a two-story floor lounge, reading room, study areas and chapel. Additional spaces include pass-through floor lounges on the second, third and fourth floors, designed to encourage gathering in community. 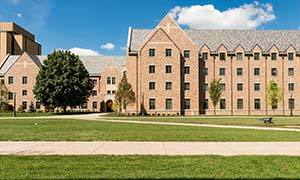 Flaherty Hall features full kitchens adjoined to the lounge on every floor, and Dunne Hall will has one full kitchen and three kitchenettes adjoined to the floor lounges. Both halls feature a fitness room, laundry, vending and storage areas as well as an outdoor patio and landscaping.

“In most halls, the upperclassmen know each other, but not here,” says Kuczora. “So we’ve asked them to wear name tags and leave their doors open. They’re using the lounge on the first floor to meet each other and hang out. Different groups are playing ping pong all the time. We’ve also been doing cookouts. And guys are already out there throwing the Frisbee, playing soccer or reading on the lawn.”

Jimmy and Susan Dunne of New York City and Jay and Mary Flaherty of Los Angeles each made $20 million gifts to the University of Notre Dame for the construction of two new residence halls.

Both halls were dedicated Oct. 14.

‘Preparation is everything in landscape construction’

Summers are generally a busy time for Landscape Services, the department that maintains most of the University’s 1,2500 acres of land.

It’s not unusual for the team’s 32 full-time employees to be joined by as many as 20 seasonal workers and outside contractors to help with tasks like mowing the grass, pruning trees and shrubs, applying mulch to flower beds, renovating turf and picking up litter. This past summer, however, was a whole lot busier.

In addition to those routine tasks, the department was also responsible for landscape construction in the new East Quad. That meant laying 13 acres of sod as well as planting 375 trees and about 3,500 shrubs and flowers.

“We source as much as we can from local nurseries in Indiana, Michigan and Wisconsin. Hard-to-find material comes from the Pacific Northwest,” says Pat McCauslin, superintendent, Landscape Services. “We started storing plants and material in a holding area in early April. It took about 30 semis to hold it all.”

The landscape architects and groundskeepers on McCauslin’s staff work closely with Facilities Design & Operations team members to bring the architectural renderings for the East Quad’s green spaces to life.

In mid-June, the work began. Sod was brought in, irrigation lines were laid, and a wide selection of trees, shrubs and flowers were planted in the quad. The diversity of plant life makes the landscape design more appealing to the eye and helps protect the plant material from large-scale destruction due to disease.

Tim Dyczko, assistant superintendent, Landscape Services, credits how well the grass and plants are thriving in the new environment to a “monumental change” that Doug Marsh, University architect, instituted with this project.

“Preparation is everything in landscape construction,” says Dyczko. “Facilities Design & Operations screened all the topsoil we used in the quad. That got rid of rocks, garbage, asphalt, rebar and other debris. You can see how well the turf is doing because of it. Good, clean, well-drained material boosts the plant life.”

McCauslin agrees: “Everything is green, lush and thriving because the plants adhere well through the soil.”

The final product of the East Quad landscape design ended up being very close to the original vision.

“We might have fewer trees in one area so that they have room to grow and fill in as they mature. We just want to make sure that we do is in the best interests of the University, not just in terms of what it looks like today but what it’s going to look like 20 years from now,” says Dyczko.