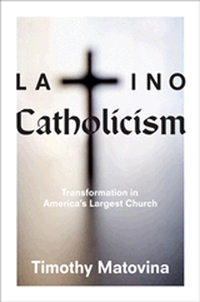 Statisticians quibble, but it is widely agreed that most Americans identify themselves as Christians, and it is inarguable that the Catholic Church is the largest of the Christian churches in the nation. More than half of the Catholics in the United States who are under the age of 25 are Latinos, and, due to birthrates and immigration, a majority of American Catholics will be Latinos by the year 2050. As Peter Steinfels, former religion writer for the New York Times summarized, “Latino Catholics will not just have a place at the table, they are likely to be the hosts at the table.”

Timothy Matovina, professor of theology and director of the Cushwa Center for the Study of American Catholicism at the University of Notre Dame, has for years had a scholarly interest in this swelling and, as yet, uncrested current of Catholic and American history. His new book, “Latino Catholicism: Transformation in America’s Largest Church,” published by Princeton University Press, closely considers the five-century-long history of Latino Catholics in America and how that history has affected them and their Church. “It’s an important story because Latino Catholics are changing the Church and the Church is changing them,” Matovina says.

Matovina’s study itself is changing, or at least challenging, the conventional narratives of American Catholic history, which tend to concentrate on the experiences of the European Catholic immigrants of the 19th century and the gradual assimilation of their descendants into middle class American life. The predominance of these “Euro-Americans,” not only in the history, but also in the contemporary leadership of the Catholic Church—its bishops, priests, ministers, educators, and active laity—can obscure the facts that large numbers of Spanish-speaking Catholics have lived within today’s national borders for twice as long as United States history, and that Catholic dioceses had been established and Marian shrines were attracting pilgrims here long before the landing of the Mayflower and the establishment of the colony at Plymouth Rock.

In addition to its assessment of the Latino Catholic past in America, Matovina’s book concerns Latinos’ contemporary efforts in living out and celebrating their faith, and the nationwide effects that these efforts have had in Catholic parishes and ministries as well as on social movements, politics and voting patterns. As an expanding and largely working class Latino population makes its presence increasingly palpable and its voice increasingly audible in the life of the Catholic Church in America, the familiar disagreements between “progressive” and “traditionalist” Catholics will be given a new context. According to Matovina, the concerns of Latino Catholics “reveal that in addition to the widely discussed split between the right and the left, another prominent divergence in U.S. Catholicism is one along class and cultural lines…From perspectives on the Catholic past, to current ecclesial life, to faith-formation for the Catholic adults of tomorrow, Hispanics’ viewpoints are more akin to those of European immigrants of yesteryear than to present day Euro-Americans.”

Matovina nevertheless notes that Latino Catholics are themselves affected by such current issues as the pressure of a secularized American culture, the rising popularity of Pentecostal and evangelical religion, the national controversies over immigration and the ongoing scandal of clergy sex abuse. He insists that these challenges merely underline the crucial responsibility of the Catholic Church to strengthen its Hispanic pastoral ministries, arguing that “ongoing support and development of such ministries is indispensable for the future of U.S. Catholicism.”

Matovina would likely agree. “Latinos have much to offer U.S. Catholicism,” he writes. “Their youthfulness is a source of revitalization for Catholic faith communities. Their leadership has extended Catholic involvement in faith-based community organizing and activist efforts that expand grassroots participation in civil society. Their ritual and devotional traditions incite embodied prayer and faith.”

Matovina’s account emphasizes that the rise of Latino Catholics confronts the Catholic Church in America with a profound and tumultuous challenge, but it also illuminates that challenge and reveals it as a blessing.