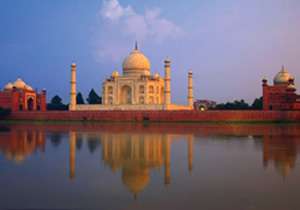 For more than 400 years, the Taj Mahal has mesmerized millions of people with its detailed majesty as one of the greatest triumphs of humankind.

But even one of the Seven Wonders of the World needs a little help sometimes.

High levels of pollution, extreme climate conditions, humidity, and the dropping water level of the nearby Yamuna River threaten the structure’s integrity. Man-made threats like industrialization, tourism and outright vandalism also pose a danger to this World Heritage Site.

“My research is based on understanding and documenting World Heritage Sites. It isn’t documentation on how they look or how they are measured, but to understand how they were built and what kind of techniques were utilized in constructing them,” Krusche says.

In the summer of 2008, the team spent four weeks in India studying Mughal tombs, with a particular focus on the Taj Mahal. The team has also secured permission to 3D-scan the mausoleum in January next year.

Up to this point, no 3-D scans existed so if the structure were to deteriorate, reconstructing it would be nearly impossible

“Tens of thousands flock to the memorial of love each year, not many question why, how or when the mausoleum came into being. Lack of information, evidence and knowledge on the tomb’s composition, architecture and lineage is extremely disturbing,” Krusche explains.

In addition, the Taj Mahal is key to studying Mughal architecture – an amalgam of Islamic, Persian, Turkish and Indian architecture, which “is still among the world’s deepest buried mysteries,” according to Krusche.

The team’s notable initial findings include the discovery of etchings on the tomb’s pavement that date back to the time of tomb construction, which provide insight into techniques and tools used during the Mughal reign since craftsmen often engraved etchings to align structures. Krusche’s team also noted erosion of the monument’s white marble and red sandstone structure which their analysis determined was from tourists’ unrestricted hand-touching of the mausoleum’s carvings and embellishments.

Though Krusche’s research on the Taj Mahal validates concerns that natural conditions and man-made threats are causing deterioration, she believes recent claims that the structure is in danger of collapsing within a few years are baseless.

“For the Taj Mahal to collapse within three to five years is near to impossible,” she says. “Though the water level of the Yumana is receding, it is baseless to conclude that the memorial will collapse altogether.”

Still, the preservation of a structure like the Taj Mahal requires the immediate attention of architectural and archeological organizations, particularly with its documented deterioration.

“Immediate stoppage of the removal, replacement or dumping of stones from the memorial’s complex is of the utmost importance,” Krusche says, “and regulations concerning physical contact with the mausoleum’s stones and carvings are a prerequisite to conserving the tomb’s marble structure.”