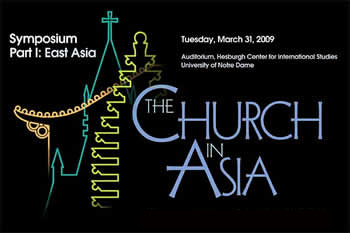 The University of Notre Dame will host “The Church in Asia,” a symposium to explore the past, present and future of Catholicism in Asia on March 31 (Tuesday) in the University’s Hesburgh Center for International Studies.

The symposium, the first in a series of three, will feature presentations by scholars who will focus on the Church in Japan, China and South Korea.

The event will open at 9 a.m. in the auditorium with a lecture titled “The Church in Japan: An Intercultural Narrative” by Kevin Doak, professor and chair of the Department of East Asian Languages and Cultures at Georgetown University.

Other scheduled talks are:

The symposium will conclude with a roundtable discussion moderated by Robert Gimello, a faculty member in Notre Dame’s Departments of Theology and East Asian Languages and Cultures.

“The Church in Asia, Part I” is co-sponsored by Notre Dame’s Center for Asian Studies, Kellogg Institute for International Studies, Institute for Scholarship in the Liberal Arts and Department of Theology.

More information is available on the Web at
http://kellogg.nd.edu.