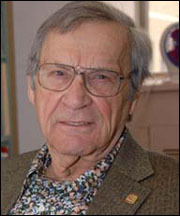 Leading physicists from around the world gathered at the University of Notre Dame this month to honor a long-time member of the Universitys College of Science faculty at theSymposium on Atomic Physics: A Tribute to Walter Johnson.

The Frank M. Freimannn Professor of Physics, Johnson will be retiring from teaching this spring after 50 years at Notre Dame, where he has led the way in research involving physics, mathematics and computers.

Johnson, a theoretical physicist, investigates relativistic and correlation effects in heavy atoms using relativistic many-body methods derived from Quantum Electrodynamics. The symposium in Johnsons honor provided an occasion for more scholarship as well as reflection on his decades of contribution to the field.

Most recently, Johnson and two other Notre Dame researchers, physicists Jacek Furdyna and Neal Cason, won the American Physical Societys (APS) first Outstanding Referee Award, a lifetime achievement award for scientists assessing manuscripts for publication in APS journals. The APS, which represents more than 45,000 physicists worldwide, said the refereesreview not only maintained high standards for the publications but improved their quality and readability.

This is a great opportunity to bring together many of the leading people in atomic physics from around the world,said Gordon Drake, from the University of Windsor, Canada, at the symposium on April 4 and 5. Its a great opportunity to exchange ideas and reminisce. Its both professional and to commemorate one of the best-known men in the field.

Johnson, who attended the University of Michigan on the G.I. Bill after World War II, earned his undergraduate and graduate degrees there, where he was the last student of Otto Laporte, discoverer of the Laporte Rule.

He was chairman of Notre Dames physics department from 1982 to 1985, although he was in Germany on the Alexander von Humboldt Senior U.S. Scientist Award for one of those years and returned to his research focus, which includes photo-ionization and relativistic many-body perturbation theory among other things.

Johnson has advised 21 doctoral students, taught some 10,000 undergraduates, written a book on atomic structure theory, and authored or co-authored 250 published papers, including six already this year. His 50 years of teaching and research at Notre Dame have left a legacy, and students, post docs and colleagues around the world continue to appreciate his wisdom and guidance.