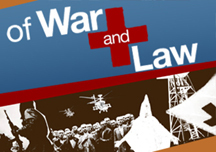 Martin van Creveld, a prominent military historian and strategist from Israel, and John Robb, a former U.S. special operations officer and expert on the future of war, are the lead speakers for"Of War&Law,"a symposium and film festival to be held Feb. 12 to 14 (Thursday to Saturday) at the University of Notre Dame.

Speakers will focus on the dramatic changes in warfare during the past 60 years and the resulting challenges to international humanitarian law.

“Wars used to be relatively simplea battle between nation-states with regular armies,”said conference organizer Luc Reydams, an assistant professional specialist in Notre Dame’s Department of Political Science and a faculty fellow of the Kroc Institute for International Peace Studies.

“But now everything is blurred, and it’s hard to distinguish between war, crime, terrorism, massive human rights violations and even between war and peace itself. In this new context, the laws and treaties designed to protect civilians, wounded and sick combatants and prisoners of war must be re-examined to make sure that they make sense and can be fully implemented,”he said.

The symposium begins at 12:30 p.m. Feb. 12 with van Creveld’s lecture,“The Culture of War,”in the Hesburgh Center auditorium. A panel discussion will be held at 7 p.m. in the DeBartolo Performing Arts Center, followed by a book signing and film.

Events on Feb. 13 begin at 12:30 p.m. with Robb’s lecture,“The Economics of Contemporary Armed Conflict,”in the Hesburgh Center auditorium. A panel discussion will be held at 4 p.m. in the DeBartolo Performing Arts Center, followed by a book signing and two films. Two more films will be presented Feb. 14.

Van Creveld has been on the faculty of the Hebrew University in Jerusalem since 1971. He is the author of 19 books, including"Supplying War,""Command in War,""The Transformation of War,""The Rise and Decline of the State,""The Changing Face of War: Lessons of Combat from Marne to Iraq,"and"The Culture of War."

Robb is a high-tech entrepreneur and the author of"Brave New War,"a ground-breaking book on the Iraqi insurgency, global guerrillas and open-source warfare.

Other speakers and moderators will include Ccile Aptel, a long-time staff member of the International Criminal Tribunals for Rwanda and the former Yugoslavia; David Cortright, a research fellow at the Kroc Institute; Frdric Mgret, the director of the McGill Clinic for the Special Court of Sierra Leone; Mary Ellen O’Connell, Robert and Marion Short Professor of Law at Notre Dame and a fellow of the Kroc Institute; and Jamie Williamson of the International Committee of the Red Cross.

All symposium events are free and open to the public. More details on the symposium are available on the Web at http://kroc.nd.edu/newsevents/events/upcoming .The six films are free but require tickets. Visit performingarts.nd.edu for more information on the films. Call 574-631-2800 to reserve tickets.