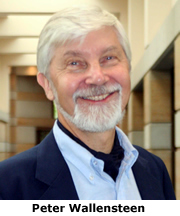 Peter Wallensteen, the Dag Hammarsköld Professor in the Department of Peace and Conflict Research atUppsalaUniversityinSweden, has been appointed the inaugural holder of the Richard G. Starmann Sr. Research Chair in Peace Studies in the Joan B. Kroc Institute for International Peace Studies at the University of Notre Dame.

The endowed chair is named after Richard G. Starmann Sr., a member of the Kroc Institute Advisory Council and a trusted friend and colleague of the late Joan B. Kroc. The institute is named in honor of Kroc, its principal benefactor, who was one of the worlds leading philanthropists, a passionate advocate for the poor and underprivileged, and an ardent supporter of nuclear disarmament and nonviolent conflict transformation.

The Starmann professorship is a named chair held for a three-year renewable term by a senior peace studies scholar who has built a distinguished research and publication record in one or more of the sub-fields of peace research. Wallensteen will consult and collaborate with Kroc faculty on institute research projects, supervise graduate students in peace studies, make a major presentation on research in progress, teach a graduate seminar in peace studies research, and offer a series of lectures to undergraduate students on the core concepts and methods of peace research.

One of the worlds leading peace researchers, Wallensteen is director of the Uppsala Conflict Data Program and leader of the Special Program on International Targeted Sanctions.

The Conflict Data Program, established at Uppsala in the mid-1980s, continuously collects information on armed conflicts. The definitions and categories used by the project have gradually been refined to fit scholarly requirements of global comparability, so that the data is useful for systematic studies of the origins of conflict, conflict dynamics and conflict resolution. With the creation of the global conflict database, this information is now available to anyone in the world.

The Special Program on International Targeted Sanctions was initiated as the “Stockholm Process” by the Swedish Ministry for Foreign Affairs together with the Department of Peace and Conflict Research atUppsalaUniversityin November 2001. The Stockholm Report (“Making Targeted Sanctions Effective”) was delivered to the United Nations Security Council on Feb. 25, 2003.The program deepens academic research on targeted sanctions with systematic studies as well as with policy-related reports, and it keeps a Website continuously updated on developments on sanctions issues in the U.N.

Wallensteen is the author of, among other works,International Sanctions: Between Wars and Words,Understanding Conflict Resolution: Peace, War and the Global System,andMaking Targeted Sanctions Effective,as well as recent commissioned studies of means for the prevention of genocide, dialogue and other international strategies for democracy, and the U.N.s post-conflict peace building capacity.His research interests also include the durability of peace agreements, the impact of preventative measures on the dynamics of disputes and conflicts, and reforming the United Nations as an effective institution for international peace and security.

Wallensteen will collaborate with other Kroc Institute faculty in building an Uppsala-Kroc project enhancing and exploiting the usefulness of theUppsalaconflict data for Kroc Institute studies of conflict prevention, comparative peace processes, and the measuring and evaluation of peace building measures in specified conflict settings.

Starmann has specialized in crisis management in theUnited States, Europe, Asia and thePacificBasinfor more than 25 years.He was an officer of McDonald’s Corp. for 19 of his 27 years with the company and is a founding member of the Ronald McDonald House International Advisory Board.

As senior vice president of McDonald’s, Starmann was in charge of worldwide communications and led the company’s global crisis management team from 1981 to 1998.In that role, he regularly dealt with government agencies, special interest groups, local and national law enforcement officials as well as various media.Starmann has extensive management experience with health issues and food- and air-borne illnesses.In addition, he has led the response to bombings, terrorist threats, extortion attempts, shootings and food tampering cases for American companies operating in theUnited States, Europe andAsia.

Starmann was a first lieutenant and paratrooper in the U.S. Army Special Forces inVietnamfrom 1969 to 1970.He is a former member of the Board of Directors of the San Diego Padres professional baseball team.

A graduate of theUniversityofMississippi, Starmann has lectured atDartmouth, Purdue, and the Universities ofNebraska,Denver,Mississippiand Notre Dame.AtDartmouthand Notre Dame, he is a regular speaker in the MBA programs, and at Notre Dame he serves on the Advisory Council of the Mendoza College of Business.

The Kroc Institute, the worlds leading research, teaching and policy center specializing in strategic peace building, is celebrating its 20th anniversary in 2006-2007.More than 150 Notre Dame undergraduates enroll in the peace studies supplementary major or interdisciplinary minor offered by the Kroc Institute, which also boasts more than 400 graduates of its masters program in peace studies.