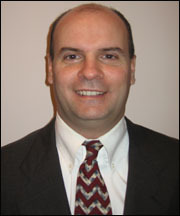 I wont bore you with the details.

Its a line Jim Mazurek, Notre Dames newly appointed sustainability director, uses during the many campus presentations hes made since arriving in early May.

As it happens, Mazurek seems in no danger of boring people. But he could bury them, for all the data hes absorbed in a few short weeks about the Universitys annual environmental impact: the 80,000 tons of coal, the 275 tons of copy paper, the 8,900 printer cartridges, the 12,000 tons of garbage.

Is it really possible we consume 900 million gallons of water a year? Some numbers are smaller, yet worrisome: We consume enough electricity a year to power more than 15,000 residential homes. Although ourcarbon footprinthas not been precisely defined, Mazurek expects it to range between 150,000 and 200,000 metric tons.

By the end of his first 100 days, Mazureks is likely to be a household name and a familiar face. Showing up at 5 a.m. to volunteer for Old2Gold, as he did, will help you make friends quickly. Also by the end of those first few months, Mazurek will have begun to forge the above details into a structure for sustainability activities that leans heavily on measurements and accountability.

These early steps will be necessary before Mazurek can propose the method and methodology for attracting proposals for the $2 million in loan money the University has set aside to encourage sustainability initiatives. Hiring Mazurek, whose office will host three full-time staff and about a half-dozen student workers, and the loan program are just two signs of the Universitys determined foray into sustainability. Change has been swift enough that the national College Sustainability Report Card 2008 identified Notre Dame as among the most improved over the past year.

Mazurek, an engineering undergraduate, had not foreseen a future in sustainability in 1991 when he graduated from Notre Dame, having attended to issues of ecology and energy efficiency no more or less than the average student, he says.

Today, he is a hybrid-driving parent whose family recycles so assiduously, they could use the trash barrel for recycling and the recycling bin for trash. Whatever strong messages he ultimately delivers about needed change on campus, he promises to always be more tactful than his two young children, who proselytize about recycling with sometimes embarrassing zeal.

In between graduation and this new job, Mazurek consulted for a firm that eventually became a leader in helping global businesses negotiate a world increasingly conscious of the environment. Simply put, his work often helped corporations understand that being green could be an asset. Notre Dames Catholic mission implies an additional obligation.

Mazureks background has given him a firm grasp ofthe levers to pull for sustainability.Recycling is an obvious area to address, but there are so many: Should we address our commuting habits?Use only vendors who have green practices? Invest our endowment only ingreencorporations? Build and renovate buildings by stringent, and expensive,greenstandards?

And a really hard question: how to marry a sincere wish to reduce our impact to our growing research profile, which will require more energy to support?

The key is, how do we grow smartly.Our total energy consumption on campus has more than doubled in the last 20 years,he says.Over the same period, energy usage per square foot has grown by 44 percent.

As he puts methodologies into place during the summer months, he looks forward to taking a more human measure: how to leverage the energies of an enthusiastic student body and faculty.