Catholic elementary school principals, speaking out in a major nationwide survey, report faithful commitments alongside acute challenges in the operation of their schools, and they identify financial management, marketing, Catholic identity, enrollment management and long-range planning as their schools’ top five areas of need.

The study, completed by the University of Notre Dame’s Alliance for Catholic Education and its Mary Ann Remick Leadership Program, is a rare, comprehensive glimpse of these principals’ views on what they need in order to do their jobs better and how they describe the state of Catholic education today.

“It is difficult to read the responses of Catholic school principals in this study and not sense both their commitment to this ministry and the overwhelming responsibilities that are associated with it,” say the authors of “Leadership Speaks: A National Survey of Catholic Primary School Principals.” They paint a picture of many principals as faith-filled individuals confronting unusually challenging expectations, worthy of new forms of support, such as their own national association.

The study has not yet been published, but the authors — Rev. Ronald Nuzzi, senior director of the Mary Ann Remick Leadership Program, along with two members of the Remick Leadership Program faculty, Anthony Holter and James Frabutt — presented an overview of their work during the National Catholic Educational Association annual convention in Boston and at the American Educational Research Association annual meeting in Vancouver, Canada, both held in April. 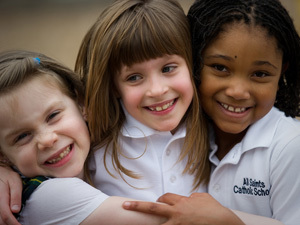 A total of 1,685 Catholic school principals representing all areas of the country and all types of school locations and organizational structures participated in the survey during 2010, answering nearly three dozen questions.

When invited to give open-ended answers, the participants narrowed down the five top areas of need to the two they called most important — enrollment management and financial management — which together often capture the most basic goal of survival: keeping a school open.

Based on the data obtained, “the Church seems to have hired well, attracting mission-driven and loyal individuals to the overarching goals of Catholic education,” according to the study. But these principals live daily with what has been called “the tyranny of the urgent,” hungering for more support — “emotional as well as financial.”

“A Catholic school principal has job expectations that go beyond what can be found in secular educational literature,” the authors note, pointing out that the work of a chief executive officer and a chief operating officer is combined with the school’s overarching religious purpose: “the sanctification of all its stakeholders.”

The study provides enormous amounts of data describing today’s Catholic school principals and outlining their views, and the authors conclude with four recommendations: