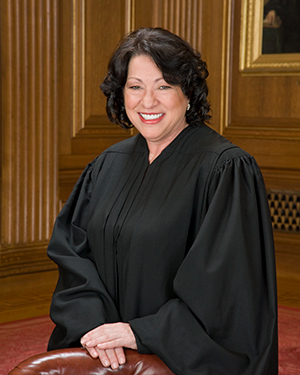 Update: The release has been updated with a change in venue.

A public conversation with U.S. Supreme Court Justice Sonia Sotomayor will be held from 7 to 8:15 p.m. Sept. 2 (Wednesday) in the Leighton Concert Hall of the University of Notre Dame’s DeBartolo Performing Arts Center, the University’s president, Rev. John I. Jenkins, C.S.C., announced Wednesday (Aug. 12). She will discuss a wide range of issues with NBC News correspondent Anne Thompson, and the discussion will be moderated by U.S. Court of Appeals Judge Ann Claire Williams. Both Thompson and Williams are Notre Dame alumnae and Trustees.

Nominated by President George H.W. Bush to the U.S. District Court, Southern District of New York, in 1991, she served in that role from 1992 to 1998 and as a judge on the United States Court of Appeals for the Second Circuit from 1998 to 2009. President Barack Obama nominated her as an associate justice of the U.S. Supreme Court on May 26, 2009.

The event is sponsored by the Office of the President, Notre Dame Law School and the Institute for Latino Studies, and is free and open to the public. Doors open one hour before the event.

While on campus, Sotomayor also will speak with smaller gatherings of students and faculty in private meetings.