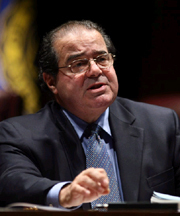 United States Supreme Court Justice Antonin Scalia joined several of the nations most prominent legal scholars for a conference Oct. 19 at Notre Dame Law School.TitledSeparation of Powers as a Safeguard of Federalism,the conference was sponsored by A.J. Bellia, professor of law, and the Notre Dame Law Review.

Scalia delivered the opening lecture,The Importance of Structure in Constitutional Interpretation,during which he discussed the unique function of the judiciary in American government and analyzed several cases that have gone before the court. After his talk, Scalia allowed time for student questions. During a lunchtime reception, Scalia spent more than an hour mingling and talking with students in the student lounge.

Scalia is a graduate of Harvard Law School. He began his career as a member of the federal judiciary in 1982 when he was appointed to the United States Court of Appeals for the District of Columbia Circuit. He was subsequently nominated by President Reagan to serve as an Associate Justice of the Supreme Court. He took his seat on the court on Sept. 26, 1986.

The Notre Dame Law Review was founded in 1925. Its members have gone on to become some of the most notable judges, practitioners and scholars in the country. Law students edit the entire volume of the Law Review, and its five issues comprise approximately 2,000 pages of legal scholarship. The finished publication serves as a resource for legal scholars and a tool for practitioners.