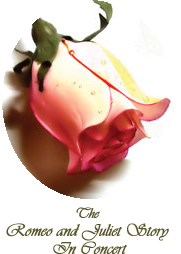 Summer Shakespeare, the professional theatre in residence at the University of Notre Dame, will presentThe Romeo and Juliet Story: In Concertat7:30 p.m.Jan. 26 (Friday) in the Decio Theatre of theDeBartoloCenterfor the Performing Arts.

Admission to the performance ranges from $12 to $50, and tickets are available by calling theDeBartoloCenterat 574-631-2800.

A special off-season event for Summer Shakespeare, the production , sponsored by the Ryan Memorial Foundation, is a celebration of the many ways Shakespeare’s classic story of star-crossed lovers has been told through the centuries. The performance incorporates scenes from Shakespeare with selections from Charles Gounod’s operaRomeo Et Julietteand songs from Leonard Bernstein’sWest Side Story.The three elements are intermingled to create a unique version of the famous tale that includes two opera singers, two actors, a narrator and a 30-piece orchestra onstage.

The production showcases and combines into one evening the ways in which some of the world’s most accomplished artists have approached the famous story,said Jay Skelton, director of the production and producing artistic director of Summer Shakespeare.I mean, how many times can you hear Shakespeare, Sondheim, Bernstein and Gounod on the same stage in the same evening?"

Proceeds from the event will assist in the creation of the Dr. Paul A. Rathburn Scholarship Fund honoring the founder of Summer Shakespeare.