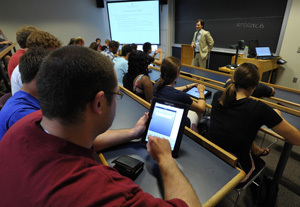 Perhaps the most surprising findings from the first phase of the University of Notre Dame’s year-long study of eReaders are what didn’t take place in last fall’s paperless pilot Project Management course.

“The iPads certainly were not disruptive to the learning environment,” said Corey Angst, assistant professor of management. “In fact, I never felt the students were more focused on the devices than on what I was teaching them. Tech support wasn’t overwhelmed by the class, and the devices weren’t lost or broken.”

The potential for distraction in the classroom and damage to the iPads – which are not inexpensive and were loaned to students by the University for the course – were among the issues Angst sought to study in his pioneering experiment with the eReader devices, which were handed out to students at the start of the fall semester. 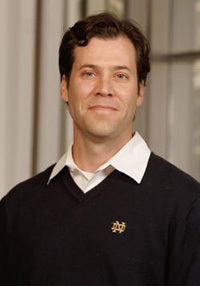 A member of Notre Dame’s ePublishing Working Group, Angst taught Notre Dame’s first class using Apple’s wireless tablet computer to replace traditional textbooks. After his 7-week course ended, the iPads were redistributed to students in three different undergraduate courses and a small group of MBA students, and this semester they are with law students.

Members from a broad array of Notre Dame’s colleges and departments are evaluating the creation, distribution, consumption and usefulness of electronic course materials in an academic setting by examining the usefulness of the iPad as an eReader, with the broader goal of designing an “ePublishing ecosystem” that serves faculty, students and staff by making the creation, distribution, sharing, reading and annotation of eMaterials simple and inexpensive.

“Our findings suggest the greatest value of the iPad may not be its ability to function as an eBook reader, but instead its capacity to consolidate or aggregate information,” Angst says. “A statistically significant proportion of students felt the iPad made class more interesting, encouraged exploration of additional topics, provided functions and tools not possible with a textbook and helped them more effectively manage their time.” 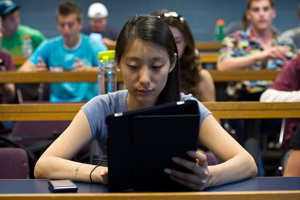 “It made team communications so easy,” says senior Gabrielle Tate. “Often in group projects, it’s difficult to send files between Macs and PCs, but having everyone on the same device expedited the process. My favorite function was DROPBOX, which allows users to upload documents into its shared space and avoid sending email after email. We could almost effortlessly share our project work and the information was accessible from our iPads as well as our own computers.”

Tate’s group helped South Bend’s Center for the Homeless evaluate establishing a guest-run coffee shop, and the project was so successful it now is entered in Notre Dame’s McCloskey Business Plan Competition.

“It wasn’t the eReader function of the iPads that won over the students,” Angst says. “It was a host of other features that support learning. For example, students were able to instantaneously check statistics I mentioned in class or pull up information to add to the discussion as I talked about various companies’ projects. Moments before the start of class, I could place a video into students’ dropboxes, and the majority of them would arrive having already watched it and able to discuss it. Those sorts of things made the class more interesting and dynamic and could never have happened in the past.”

Angst notes further studies including natural observation, surveys and student focus groups are necessary to fully explore the extent to which learning outcomes vary with respect to iPad use.

But Tate already is sold on the device.

“The iPads made our project more streamlined and efficient,” she says. “I definitely had a much better experience in class because of it.”