Results from the project, called “Perdigão,” which included a major field experiment in Vale do Cobrão, a valley in eastern Portugal, show that the speed and direction of wind over complex terrain at the height of wind turbine hubs differ significantly from standard weather forecasts, according to the report published in the Bulletin of the American Meteorological Society.

Those forecasts, which wind turbine operators rely on to bring facilities online and supply wind power to the grid, are only 40 to 50 percent accurate in regard to the annual energy production — creating a challenge for the industry.

“A major focus of Perdigão project is to improve forecasting and planning horizons for wind turbine facilities, both in terms of turbine siting and operations,” said Harindra Joseph Fernando, lead principal investigator of the study for the U.S. group and Wayne and Diana Murdy Endowed Professor in the Department of Civil and Environmental Engineering and Earth Sciences and the Department of Aerospace and Mechanical Engineering at the University of Notre Dame. “Wind flows are steered sensitively by topography. Mountains, vegetation, rivers and streams shape the speed and direction of wind, so what happens at the site of the turbine is very different from macroscale meteorological forecasts.”

To be useful, wind power forecasts need to be made at least six hours in advance so that electric grid operators can balance the loads effectively. The project aims to improve such forecasts using a combination of techniques, in particular by improving the so-called microscale models. These models capture the details of flow surrounding a wind turbine with fine accuracy, and provide winds at points separated by 100 meters or so horizontally (compared to tens of kilometers in weather predictions models). 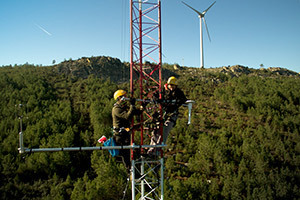 The study’s location was chosen specifically for its all-encompassing terrain of ridges, slopes, farmland, vegetation, canyons and river flow. Complex terrain accounts for the majority of all land surface on Earth — one reason why scientists want to better understand how to maximize wind capture for turbine facilities.

Both the United States and the European Union (EU) are working to increase wind energy shares of their respective total energy consumption. In 2017, 6.3 percent of the total electricity produced in the U.S. was from wind turbines whereas the share in the EU was 11.6 percent. According to the Department of Energy, utility-scale wind power facilities have been installed in 41 states, with smaller-scale systems distributing wind power in all 50 states as well as Puerto Rico, Guam and the U.S. Virgin Islands.

“The Perdigão project represented a true international collaboration, culminating in a project with an unprecedented number of instruments,” said Nick Anderson, program director with the National Science Foundation’s Division of Atmospheric and Geospace Sciences, which funded the research. “The data from the field campaign will be used by researchers for decades, and will improve forecasts of local wind conditions that impact wind energy, firefighting, air pollution and warfare applications.”

In addition to the National Science Foundation, funding for the project was provided by the European Commission’s ERANET+, the Danish Energy Agency, the German Federal Ministry of Economy and Energy, the Portuguese Foundation for Science and Technology, and the U.S. Army Research Laboratory.