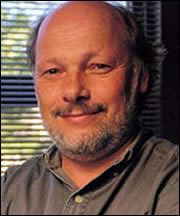 The course seemingly waned in popularity in the 1990s after the Cold War. Over time, and as its originator, Paul Kenney, retired, its content was reduced from a three-hour to a one-hour course.

But when Michael Wiescher, Freimann Professor of Physics, signed on to teach the course this fall, he says he received surprising attention. Wiescher found himself raising the class size from 18 students to 24. The class is comprised of a cross section of physics, engineering and business students who learn about the physics and technological aspects of nuclear weapons and warfare as well as the ethical, legal and social aspects. The course also includes a community research component.

Wiescher is both an unusual and a logical candidate to teach the course. On one hand, fall was to have been a non-teaching semester for him, as he administers the activities of the Joint Institute for Nuclear Astrophysics, a pioneering physics research program supported by a $10 million grant from the National Science Foundation.

On the other hand, Wiescher is a devoted student of history who had planned to delay life as a research nuclear physicist (he holds a doctorate in the subject) to pursue a second doctorate in history. As a principle, he accepts assignments to teach new courses for the pleasure of learning something new. Furthermore, as a native of Germany who grew up in the post-World War II environment under British occupation, he has first-hand experiences about the social impact of war.

Wiescher was working in a German physics lab when the Soviet nuclear power facility in Chernobyl had its famed breakdown in 1986. The fallout reached Germany with such intensity that a simple walk through the rain littered him with enough radiation to set off radiation detection equipment from yards away.

Employing assistance from a course development grant for the Center for Social Concerns, Wiescher has infused the class with hands-on research projects that use the community as a laboratory for understanding the physics of nuclear warfare. One exercise has students looking into the fallout patterns of nuclear tests in the west in the 1950s. As happened to him in Germany when during the Chernobyl incident occurred, the South Bend-Mishawaka area experienced fallout, too.

Wiescher begins the course with historical perspective: “The first world war changed the mindset of mankind. Before then, war was only indirectly connected with the rest of the population. The first world war triggered the development of the first weapons of mass destruction: chemical warfare, biological warfare. There were tank weapons, air raids. It was a shift in mindset.” he says. “Also during the first world war, the first scientific weapons laboratories were built up.”

Helping students discover how close to home the latter effort hit, Wiescher encourages them to study the early connection between Notre Dames accelerators and the Manhattan Project, which developed the atomic bomb.

Students are also learning about the vast increase in exposure were sustaining as a result of technology. From nuclear medicine, which employs radiation in diagnostics as well as treatment, to the radiation one absorbs through ordinary air flight, local residents are regularly exposed to radiation.

Wiescher is supported by guest speakers and other faculty as he covers the ethical and legal aspects and the social and economic aspects. Among social aspects, how does the local press reflect anxiety about nuclear war? How do churches and other organizations respond with anti-war movements? What local industries contribute to the creation of weapons?

Wieschers experience has taught him that a course in physics cannot address all studentsanxieties about modern day weaponry: not when chemical and biological warfare are options. But the students are willing to delve into this multidimensional approach such that he would like to see the class re-expanded to a three-credit course.