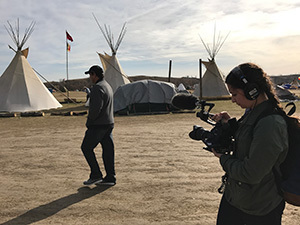 Opposition to the proposed Dakota Access Pipeline (DAPL) has been ongoing for nearly a year. Beginning last August, opponents occupied federal land near the Standing Rock and Cheyenne River Sioux reservations in North Dakota in an effort to halt the construction.

Concerned about safety due to spring flooding, North Dakota state officials cleared the camp in late February. However, opponents have insisted that they will continue their efforts to stop the project. Following four days of protests on the National Mall, opponents of the pipeline marched on the White House on Friday (March 10).

A pair of University of Notre Dame student filmmakers gained in-depth knowledge into the mindset of the pipeline’s opponents while filming a documentary that first aired during the recent 28th annual Notre Dame Student Film Festival. Seniors in the Department of Film, Television, and Theatre, Ryan Leen and Erin Lattimer were in search of a topic for their festival entry when they first learned about the pipeline camp.

“We had been struggling to commit to a subject when my cousin shared a post on Facebook about the Dakota Access Pipeline,” Lattimer said. “I read the article as well as other posts without even realizing that this topic could be a potential subject for our documentary. It was not until a classmate mentioned they were hoping to pursue a documentary about standup comedy on Native American reservations that I had a mini-epiphany in class and immediately turned to Ryan and told him we should look into the DAPL.” 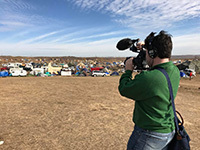 Lattimer and Lean decided to travel to the pipeline camp and tell the opponents’ story. They approached the camp with some trepidation given the media coverage they had seen of opponents, who they soon learned preferred to be known as “water protectors,” facing off against sheriff’s deputies and National Guardsmen on the front lines of the camp.

“There aren’t many words to describe what it felt like to be there in person,” Leen said. “The site of the protests was eerie and frightening. We were told not to get too close, as many media workers were being arrested. On our first day there, we were sure to keep our distance and observe from afar. With that being said, the scene was also moving and profound. Hundreds gathered from all walks of life, standing on the front lines to support a single cause. It was incredible and empowering to see such unity amongst the chaos.”

Lattimer and Leen wanted to document the daily lives of the water protectors, what they did behind the front lines and the community that they had created at the camp. In contrast to much media coverage, they found the camp to be extremely peaceful.

“I was amazed that a new town was essentially forming and there were different factions or neighborhoods of the camp, schools set up in tents, cook shacks to feed everyone, and even leadership organization with a camp center and daily meetings,” Lattimer said. “Everyone there was more than willing to help any person who came into the camp, and much of the days were filled with peaceful singing or prayer at the camp center.”

Chad Harrison, a 1995 Notre Dame graduate and Standing Rock tribal councilman, told Lattimer and Leen that the council was well aware that their fight would not be easy. Harrison said regardless of the outcome, they viewed the camps as an opportunity for the world to see that native communities are relevant and still face many difficulties in the modern age.

“In some ways, I believe the protests were not just about protecting water, but also about how native communities have been ignored or misrepresented for years,” Lattimer said.

“The process of making a documentary as an undergrad is truly an unforgettable learning experience,” Ted Mandell, a faculty member in Notre Dame’s Department of Film, Television, and Theatre who spearheads the annual Student Film Festival, said. “Besides filmmaking skills, it takes a combination of chutzpah and compassion to venture into an unknown place, meet total strangers and document a story of empathy. Erin and Ryan did a wonderful job negotiating a difficult filming environment and producing an engaging and unique look at the backdrop behind the DAPL protests.”

The “Peace at the Pipeline” film can be viewed here: https://youtu.be/PfNlV6R2Cjc