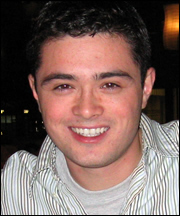 Summervacationis anything but for many Notre Dame students who spend their time away from campus working, in many cases for free, as interns for countless companies and organizations in cities all across the country. The application process is often highly competitive, and once students land those dream internships, in many cases they find that their hard work has only just begun, as they try to settle in for the summer in unfamiliar territory, far from their friends and the comforts of home.

To newly graduated senior Fran Larkin, the need was obvious – to make thereal worlda little smaller for Notre Dame students scattered about the country for the summer completing internships. So the marketing major from nearby Granger created InternNation ( www.internnation.com ), a free Web site that allows students to log on and seek each other out for support, shared resources (such as housing and roommates), and friendship.

It’s something I would have really appreciated having the past four years,Larkin said, referring to his own internship experiences.InternNation is a way to reach out to other college students, many of whom you have never met before. It’s broken down geographically so students can meet other Domers who will be in the same city for the summer.

Still in its early stages, InternNation, a private venture that is neither affiliated with nor endorsed by the University, went live only a few months ago and already features listings for more than 50 majorU.S.cities. The early reviews are glowing from students, both past and present, who think Larkin has tapped into a growing need.

“Last summer I had an internship with an ad agency inNew York,” remembers senior Willa Qian. “I couldn’t find any housing when I got there, so I was forced to stay in a hotel all summer, and I still had an hour and a half commute to work.”

Larkin was inspired by stories like Qian’s and other students’, including one who cut her out-of-state internship short last summer due to extreme loneliness. He also cites the common practice of landlords requiring students to pay rent through the summer, even if they move out of their apartments.

A past president of the Entrepreneurs Club and two-time winner of Notre Dame’s McCloskey Business Plan Competition, Larkin is about to embark on his first post-graduation on-line venture, working for the Salt Lake City-based retail and auction site Overstock.com.

If his accomplishments at Notre Dame are any indication, the real world has only just begun to see this Domer out in cyberspace.