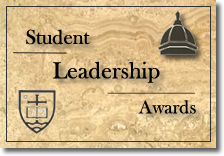 The University of Notre Dame’s Division of Student Affairs recognized four outstanding seniors with student leadership awards at a banquet held on campus this week.

The inaugural Ray Siegfried Award for Leadership Excellence , established last year in memory of the alumnus and University Trustee who died in 2005 after a long battle with ALS, was presented toMaureenSpring, a biology major fromFairfield,Conn.The Siegfried Award recognizes a Notre Dame senior who exemplifies the qualities for which Siegfried was known, including leadership, generosity, devotion to the Catholic faith and participation in athletic programs.

Spring devoted considerable volunteer time in service toLoganCenter, theSouth Bendagency that provides assistance to people with disabilities. As secretary, vice president and president ofLogans student program, she worked on budgeting, recruited other volunteers, arranged transportation and organized activities. She also served in the Pasquerilla West residence hall as a Eucharistic minister and lector and was an avid participant in interhall and intermural athletics, earning the title Miss Rec Sports.

The Rev. A. Leonard Collins, C.S.C., Award , given to a graduating senior who has made a substantial personal effort to advance the interests of Notre Dame students, was presented to Lizzi Shappell, a political science and peace studies major fromMishawaka,Ind.

Active in student government throughout her undergraduate career, Shappell served this year as student body president, using her position to bring attention to issues such as gender relations, eating disorders and the relationship between students and the local community. She also participated in an Urban Plunge, an international summer serviceproject inHonduras, service at St. Margarets House inSouth Bend, and an internship for Sen. Richard Lugar.

The John W. Gardner Student Leadership Award , presented to a graduating senior who exemplifies the ideals of Notre Dame through outstanding volunteer activities reaching beyond the University, was given to Michael Dewan, a science preprofessional studies major fromAustin,Texas.

Dewan has taken a primary interest in issues of global health, spurred in large measure by his work with students atSt.JudePrimary SchoolinUgandain 2005 as part of a Center for Social Concerns international summer service program. Upon his return to Notre Dame, Dewan established a scholarship fund for children at the school and has raised more than $45,000 to date. He participated last fall in the Notre Dame Forum on global health and is now on the student advisory council for the Notre Dame Millennium Villages Project.

The Denny Moore Award for Excellence in Journalism , named in honor of the University’s late associate vice president for public affairs and communication and presented to a senior who exemplifies the qualities for which Moore was known, including personal integrity and character, commitment to Notre Dame and writing ability, was given to Will McAuliffe, a political science major from Jamesville, N.Y.

McAuliffe is a columnist for the student newspaper The Observer, the founder and director of Notre Dame Against State Killing and a member of the Pasquerilla East Musical Company. A gifted and passionate writer, he has published commentary that challenges readers to question the death penalty; to look more closely at issues of diversity, integration and complacency on campus; and to demand that all political voices – including those of dissent – be heard in academic discourse.