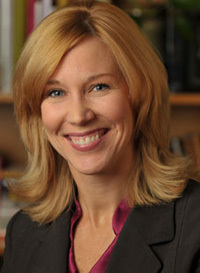 Heather Rakoczy Russell, most recently director of the Gender Relations Center at the University of Notre Dame, has been appointed associate vice president for residential life in the Division of Student Affairs, effective April 18.

“Heather is a talented leader who brings to this role an abiding and well-articulated sense of mission, proven leadership at the University, and professional experience within our unique residential systems,” said Rev. Tom Doyle, C.S.C., vice president for student affairs. “Notre Dame residence hall communities are an anchor for Catholic education in the Holy Cross tradition. Heather will lead and help chart the course for these communities as Notre Dame prepares for its third century of Holy Cross education that seeks to integrate the mind and the heart.”

Russell holds a bachelor’s degree in philosophy and theology from Notre Dame and a master of divinity degree from Vanderbilt University Divinity School. She spent five years working in the domestic violence movement with both victims and batterers. She served as victim contact coordinator and later as program coordinator for Project to End Abuse through Counseling and Education (PEACE Inc.) as well as a court liaison for the YWCA Domestic Violence Shelter in Nashville, Tenn. In addition, she served as a lay pastor of an inner-city church, hospital chaplain and community service coordinator on the board of directors for the Notre Dame Alumni Club of Nashville.

In 1998, Russell returned to Notre Dame to work in Student Affairs as rector of Pangborn Hall (1998 to 2005) and then beginning in 2004 as the inaugural director of the Gender Relations Center. Additionally, she has participated in Campus Ministry as a spiritual director for undergraduate interns and supervisor to master of divinity students.

During her time at the University, Russell has team taught several theology classes and has presented at training sessions designed to create a more welcoming environment and foster respectful dialogue about race, class, gender and sexual orientation. She has served on several campus committees, including the Advisory Committee on Academics and Student Life; University Committee for Women Faculty and Students; theCore Council for Gay, Lesbian and Bisexual Students; Committee on Sexual Assault Prevention; and President’s Ad Hoc Committee on Women.

Russell will concurrently retain her role as director of the Gender Relations Center until a search has been completed and a successor has been hired. As was previously announced in a reorganization of Student Affairs, the Office of Residence Life and Housing will become two separate offices effective June 1. Russell will work closely with the office until that date, at which time it will become part of her formal responsibilities.