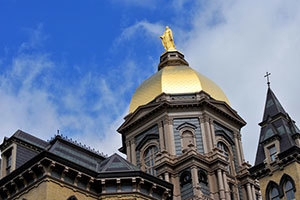 The inaugural Diversity and Inclusion Award was presented to Edithstein Cho, a sociology and peace studies major. Cho is the co-founder and producer of “Show Some Skin,” a campus production in its third year that gives voice to unspoken stories about identity, difference and discrimination on campus. “Show Some Skin” strives to be a catalyst for the campus community’s discovery and appreciation of Notre Dame’s true diversity, and has provided a platform for students to speak on issues of diversity and become an educational tool that has moved beyond the stage and into classrooms and residence halls.

Cho has also served as a member of the Student Campus Orientation Committee, implementing training for hall orientation commissioners on diversity and encouraging activities sensitive to the complexities of communities.

Africana studies and peace studies major Alex Coccia was given The Rev. A. Leonard Collins Award, honoring a graduating senior who has made substantial personal efforts to advance the interest of students at Notre Dame.

This past year, Coccia served as student body president, running on a platform focused on promoting the passions and interests of all students, including those who feel marginalized. A Truman Scholar and member of the Glynn Family Honors Program, he has worked to serve peers and improve the campus climate on a variety of issues, most notably to increase awareness for students who identify as LGBTQ minority students, students who are undocumented citizens and students impacted by sexual violence.

Coccia served as a three-year FIRE starter peer educator in the Gender Relations Center, president of the Progressive Student Alliance, steering committee member for the Call to Action Committee, founder of the 4 to 5 Movement and collaborator in the creation of “Beloved Friends and Allies: A Pastoral Plan for the Holistic Development and Support of LGBTQ Students and Heterosexual Students at Notre Dame.”

The John W. Gardner Student Leadership Award, given to a graduating senior who has exemplified the ideas of the University through outstanding community service beyond the University community, was awarded to Keon (Peter) Woo.

A Hesburgh-Yusko Scholar majoring in finance and philosophy, Woo serves as founder and president of the Jubilee Initiative for Financial Inclusion, a nonprofit community financial services provider founded by University of Notre Dame and Saint Mary’s College students that aims to replace predatory payday lending that perpetuates poverty. Through a variety of service learning and research projects, Woo became interested in the financial dimension of social justice, most particularly predatory lending institutions. He has worked with the South Bend community to explore the issue, impacting the predatory lending landscape and inspiring fellow students to discover ways to serve locally.

Karen Antonio was presented with the Sister Jean Lenz, O.S.F., Leadership Award. This honor is given to a post-baccalaureate student who has displayed leadership in promoting a more diverse, inclusive campus community for students.

A doctoral student in the Department of Chemistry and Biochemistry, Antonio has contributed greatly to promoting and connecting women in the STEM (science, technology, engineering and mathematics) fields. As the recipient of a Grad Life Grant aimed at increasing outreach and communication among women in STEM fields at Notre Dame, she organized monthly lunch sessions for women in STEM to present, hear and critique brief research presentations, coordinated a panel discussion on the Two Body Problem, offered science sessions for local children and has also been instrumental setting up a chapter for the Association for Women in Science at Notre Dame.

The Blessed Basil Moreau, C.S.C., Leadership Award was awarded to Jenna Ahn. The award, established in 2010, is given to a graduating senior who embodies Blessed Father Moreau’s vision of educating heart and mind as well as a one who demonstrates a significant effort to advancing the Catholic character of the University.

Ahn has been extensively involved in both the Center for Social Concerns and Campus Ministry, serving as a student leader on a task force working to unite the students involved with both entities. As a theology and pre-health major, she participated in both the Summer Service Learning Program and the International Summer Service Learning Program through the Center for Social Concerns, traveling to Kolkata, India, to work with the Missionaries of Charity. Deeply impacted by her time in India, she procured a grant to return for another summer to conduct research on her honors thesis in theology. Ahn also served as resident assistant in Walsh Hall.

The Denny Moore Award for Excellence in Journalism was presented to Julia Steiner. This award is given to graduating seniors who exemplify the qualities of Moore, a former Notre Dame associate vice president, who was known for his integrity, character, commitment to Notre Dame and writing ability.

Steiner, a senior English major and peace studies minor, served as editor-in-chief of Scholastic, Notre Dame’s student magazine. Under her leadership, the publication has devoted significant attention to the topic of diversity, with stories on the 50th anniversary of the Birmingham Church bombings and the inaugural efforts of PrismND, Notre Dame’s first recognized student organization serving LGBTQ students and their allies. Steiner has accepted an internship with RTE, the Irish radio television and radio network in Dublin.

Elizabeth Tucker was given the Ray Siegfried Award for Leadership Excellence, presented to a graduating senior who exemplifies the qualities for which former Notre Dame Trustee Ray Siegfried, Class of 1965, was known, including leadership, generosity, devotion to the Catholic faith and affinity for athletics.

An accountancy major and theology minor, Tucker is a four-year member of the varsity women’s soccer team, serving as captain for her junior and senior year. A Capital One first-team Academic All-American and Academic All-District choice in varsity soccer, her leadership and generosity are evident both on and off the field. As team captain, she spearheaded team community service efforts, partnering the team with local hospital to adopt a patient, coordinating efforts to tutor at a local elementary school and organizing team participation with groups including Special Olympics and the Ronald McDonald House. She served as executive board member for the Notre Dame Student-Athlete Advisory Council and has participated twice in the Rosenthal Leadership Academy. Her volunteer activities extend beyond those with the team, assisting with the Notre Dame Vivian Harrington Gray Tax Assistance Program and visiting local elementary schools for weekly tutoring and as part of the Dream Team Program.