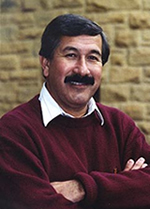 Albert Camarillo, Miriam and Peter Haas Centennial Professor in Public Service atStanfordUniversity, will give a lecture onThe New Racial Frontier in Majority-Minority Cities: African-Americans and Latinos in Compton, California, 1950-2000at5 p.m.Thursday (Nov. 17) in 208 McKenna Hall at the University of Notre Dame.The lecture is free and open to the public.

Camarillo, who has published seven books and more than three dozen articles and essays on the experiences of Mexican Americans and other immigrant groups in the U.S., will discuss material from his forthcoming bookNot White, Not Black: Mexicans and Racial/Ethnic Borderlands in American Cities.

InNot White, Not Black,Camarilloexplores the steady increase ofmajority-minoritycities as a significant demographic change in urbanAmericaover the past generation.He believes the nations largest cities with majority populations of people of color have created anew racial frontierin 21 st centuryAmerica, and that ethnic and race relations no longer can be understood from the dominant historical paradigms of majority versus minority.

The first of two Latino/a History Lectures in the 2005-06 academic year, the event is sponsored by the Institute for Latino Studies, Institute for Scholarship in the Liberal Arts, and the history, American studies and Africana studies departments.