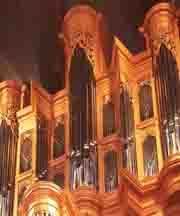 Notre Dame has long been considered “the place where the Church does its thinking.” Thanks to a new initiative, its reputation soon will be enhanced as the place where the Church also does its singing, performing, designing and creating.p. Poised and set to launch in fall 2005, Notre Dame’s Initiative in the Sacred Arts will offer graduate students the opportunity to pursue master’s degrees in sacred music and other creative disciplines such as art, architecture, and film, television and theatre (FTT). Courses will be taught primarily by liturgy faculty in the Department of Theology and interested faculty members in the Department of Music.p. “We hope that this will be the first program in what will eventually be an institute for liturgy and the arts,” said Craig Cramer, professor of organ in the Department of Music. “Notre Dame, as the most visible denominational university in the United States, would appear to be the most natural place for flourishing programs in sacred music.”p. A handful of Notre Dame undergraduates currently are pursuing bachelor’s degrees in music with a concentration in sacred music, with numerous graduates already working in the field in leadership positions at churches across the country and overseas.p. But the new initiative aims to kick the University’s efforts in the field into high gear.p. “Our phenomenal record of placing students in the field of church music already speaks for itself, but we hope to build upon our excellent record of recruiting, educating and placing the next generation of parish and cathedral musicians,” Cramer said.p. Enhancing Notre Dame’s burgeoning reputation in the sacred arts is the world-class organ newly installed in the Reyes Organ and Choral Hall in the University’s new Marie P. DeBartolo Center for the Performing Arts. Handcrafted from 400-year-old, flawless Douglas fir and featuring some 2,500 hand-poured steel pipes, the organ’s reputation is reaching far and wide, and, Cramer says, already has served as a recruiting tool for at least four prospective students.p. “This instrument is designed to mainly play the great organ literature of the 17th and 18th centuries, although it will also play admirably a lot of the 19th and 20th century and, we hope and assume, 21st century organ literature,” he said. “In this way, this organ is deliberately designed to contrast with the organ in the Basilica of the Sacred Heart, which has as its orientation mainly 19th- and 20th- century music. So what we have tried to do with these two instruments is cover a wide range of literature in a stylistically appropriate way.”p. Hoping for a marriage of program – including a new, spectacular organ and choral facility – and Notre Dame’s Catholic character, faculty in both music and theology are highly optimistic that the initiative will elevate Notre Dame’s status in the sacred arts even beyond its current level.p. “There is no more appropriate institution to foster the study of sacred music than Notre Dame,” said Rev. Michael Driscoll, associate professor of theology. “The Initiative in the Sacred Arts springs from a need to cultivate interdisciplinary opportunities and a desire to carve out a distinctive niche for Notre Dame as a Catholic university. This intersection of religion and art would benefit Notre Dame, allow us to serve others, and bring us to the forefront nationally in this important area of study.”p.