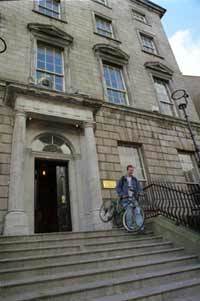 Notre Dame made a commitment in the early 1990s to expand and diversify an already strong international study program. The University has been so successful in meeting that goal that it now has the highest percentage of students participating in study abroad programs among American research universities, according to the Institute for International Education (IIE).p. For 2000-01, the most recent academic year for which statistics are available, 39.2 percent of Notre Dame students had participated in study programs in other countries. Yeshiva University in New York City ranks second with 38.8 percent, followed by Cornell (28.2), Duke (26.5) and Georgetown (26.5) universities.p. While the numbers provide important tangible evidence of the University’s strength in this area, it’s the life-changing experiences produced by study abroad that matter most. As Notre Dame’s president, Rev. Edward A. Malloy, C.S.C., recently explained, the University “vigorously promotes” international study “in the belief it is vitally important for students to experience different cultures, develop mutual understandings and build stronger connections with men and women from other nations.”p. Amanda Rothey did just that — and something more. She discovered herself.p. A junior from Pittsburgh, Rothey spend her sophomore year in Innsbruck, Austria, participating in a popular program that Notre Dame has operated since 1964. It was there that she not only came to appreciate the customs and cultures of others, she also was able to get a grip on her own priorities.p. In the Nov. 12 issue of the Notre Dame student magazine Scholastic, she told of her experiences in an essay titled “Think Globally, Live Simply.”p. “I always have been rather high-strung in an American, Burger King sense,” Rothey wrote. "I want it my way, right away, with little room for substitution. While living and traveling abroad, I learned to leave my pretentiousness at the door and go with the flow. I never would have thought that I would sleep on the grimy hallway floor of an Italian train as greasy, older men eyed my friends and me, or that I would share a bunk bed with a homeless woman who slept for 20 straight hours. Life does not always provide a soft bed and warm food. I learned to accept that, and appreciate the comforts of home more than ever. As I found that I could deal with less-than-perfect circumstances with my own ingenuity and character, I began to worry less and less about material possessions, and my list of things I could not live without became shorter and shorter. After living out of a large backpack for a month, I realized that I have way more stuff than I can ever use. I went about simplifying my possessions — and my life.p. “When I returned to the U.S. with my downsized attitude and material wants, I felt reverse culture shock. Immersed in my own super-sized American culture, I missed the smaller scale of European life. My relation to size and time in both cultures has influenced my philosophies on everyday life. After experiencing many diverse challenges while in Europe — my self-assurance has grown, and I embrace challenge more readily than in the past.”p. Rothey’s self-realization is precisely what students who study abroad should experience, according to A. James McAdams, William M. Scholl Professor of International Affairs and director of Notre Dame’s Nanovic Institute for European Studies.p. "The point of sending students abroad is to provide ‘culture shock,’ " says McAdams. "That term can be viewed negatively, but what I mean is that it’s our responsibility to confront students with different languages, cultures, and ways of looking at the world which, in turn, will help them better understand their own country and themselves.p. “Our students at Notre Dame are secure. They’re at a wonderful University where their beliefs are reinforced, there are people like them, and they’re happy. I think it’s our job to shake them up a little and help them start to ask questions and, ultimately, to seek wisdom. Study abroad is a very important way to achieve that goal.”p. McAdams knows of what he speaks. As a college sophomore, he traveled to West Berlin with the hope of seeing something new and learning “a little German” so he could study 19th-century philosophy. The experience changed him in ways he never envisioned.p. p. “It’s a cliche, but that changed my life,” he said. “It was a shock to see how other people lived, especially when I went through the Berlin Wall into East Berlin. For the first time I was able to visit a communist country and, though I didn’t like much of what I saw, it fascinated me. The whole experience laid the foundation for my career as a teacher and scholar.” McAdams went on to earn master’s and doctoral degrees in political science from the University of California, Berkeley. He has returned to Germany many times over the past 25 years and today is one of the world’s leading experts on modern German politics and the politics of retrospective justice. His most recent international study experience entailed service last year as an instructor in Notre Dame’s London Program.p. In addition to Innsbruck and London, Notre Dame offers international study opportunities in 21 other cities in 15 other countries: Australia, Brazil, Chile, China, Egypt, France, Germany, Greece, Ireland, Israel, Italy, Japan, Mexico, Russia and Spain. The program in Israel has been suspended for the past two years due to violence in the region.p. The growth in study abroad programs at Notre Dame is part of a national trend. The most recent IIE report, titled “Open Doors 2001,” showed an overall 7.4 percent increase from the previous year in the number of U.S. students participating in international study programs. As it has been for many years, Europe is the most popular destination for American college students. The leading destination for Notre Dame students is London, with some 150 participating each semester at the University’s facility on Trafalgar Square.