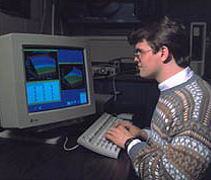 Notre Dame faculty members earned more than 420 research awards and some $73 million in externally sponsored research funding during the past fiscal year, continuing a trend that represents an average funding increase of 16 percent each of the past five years.p. Since 1998-99, incoming research dollars have grown from $34.1 million to todays $73 million figure. The report, released by the Office of Research at the close of the 2003-04 fiscal year, indicates that grants from the federal government represent about two-thirds of Notre Dames research support.p. Funding growth can be attributed to three clear factors, according to Howard Hanson, assistant vice president in the Office of Research. First is the creativity shown by faculty, who have been able to identify competitive, cutting-edge solutions to modern challenges that range from building a faster computer to curing disease to protecting the environment. Second, the University has established strategically focused research centers and institutes. Third, faculty have created multidisciplinary collaborations, often with scholars from other universities.p. In the past, we saw most awards given to individuals,Hanson says.Today, many are being made to collaborative groups.p. Also apparent in the current report is the impact of research partnerships between the University and corporate sponsors. Whereas those dollars accounted for less than $1 million in 1999, today they represent $7.1 million. More frequently, researchers are submittingintellectual property disclosuresto identify research findings which may be of commercial value. In 2001, faculty submitted 12 IP disclosures. This year that number was 43.p. These disclosures are parlayed into formal patents and into partnerships with businesses that will support further research and help develop the ideas into marketable products.p. Faculty in the Colleges of Arts and Letters, Engineering and Science generate the greatest number of grant proposals and earn the majority of research dollars. According to the new report, grants to the sciences have increased from $17.4 million in 1999 to $34.7 million today, while engineering grant support has grown from $7.3 million in 1998 to $21.1 million. Funding to the College of Arts and Letters has increased from $2.5 million to $11.1 million.p. Jeffrey Kantor, vice president for graduate studies and research, has established a goal of $100 million in annual research spendingactual research dollars going outby 2010. Research expenditures this year totaled over $65 million.p. In 1999, faculty submitted proposals requesting $104 million, compared to the $270 million for the year that just ended. That, according Hanson, is thehopperfrom which 2004-2005 grants will be awarded and should ensure continued growth.p.