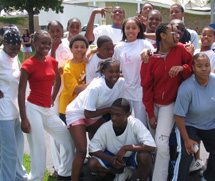 When we first got to campus, I was kind of nervous,said 11-year-old Tevin Lancaster. The sixth grader at Cleveland Elementary School in Elkhart had never before visited Notre Dame and was somewhat intimidated by the tradition and lore surrounding the top tier University located just 20 miles from her home.p. Tevin is one of some 400 kids between the ages of 10 and 16 who have been arriving on campus by the busload each day since mid-June to participate in the National Youth Sports Program (NYSP), a five-week sports and enrichment day camp now in its 14th year at Notre Dame. The program teaches kids the fundamentals of basketball, golf, swimming, soccer, football and softball, provides nutritious meals, promotes healthy lifestyles, and helps eliminate their fears of the unknown by exposing them to higher education.p. Coordinated by the Center for Social Concerns (CSC), NYSP is completely free to participants, 90 percent of whom live at or below the poverty level.p. I love being here because we do a lot of sports and have fun,Tevin said.First thing in the morning we go to breakfast and then we start playing sports, then have lunch. If I weren’t here I would probably just be watching TV or playing at home all summer.p. The Snite Museum of Art has supported NYSP for the past nine years. This summer three graduate students are instructing the kids as they study and learn the purpose of African masks in the gallery. In turn, the children are writing plans for making their own masks, to be displayed in an art show.p. The kids work with graduate and undergraduate students serving as team leaders, faculty members as coaches, and a host of other support staff such as writing instructors, educational consultants, counselors and teachers who instruct in health and nutrition, drug and alcohol prevention, writing, math and science.p. The positive role models both support the push-in-the-right-direction philosophy and also benefit from NYSP.p. "I have a group of 12-year-olds, and these kids are tough,said team leader Chloé Risto, a May graduate and former Notre Dame cheerleader.There are kids coming in who have never swung a golf club. And although many of them don’t like the idea of studying during the summer, the enrichment classes allow them to, for example, work with money, learn to budget, and learn how structured math can be incorporated into real life. I think they’re learning things they never thought could be possible.p. She added:This program has made me stronger as well by opening my eyes to a different way of life from what I have ever experienced. It’s not an easy job, but it’s the one or two kids who give you a hug before they leave that make coming back each morning worth it.p. Established by the National Collegiate Athletic Association in 1966, NYSP is financed by a grant from the U.S. Department of Health and Human Services and support from the U.S. Department of Agriculture. Notre Dames program, previously honored as one of the top 25 in the nation, is run by the CSC, but according to project administrators Rebecca Pettit and Carl Loesch, it is sustained by the entire campus and much of South Bend.p. The kids are headquartered at the Stepan Center, which twice daily sees the arrival and departure of Transpo buses – donated gratis by the transportation agency. The buses come and go in droves as they move from athletic playing fields to recreation centers to a computer lab in the LaFortune Student Center to the Snite Museum.p. The behind-the-scenes support is enormous,Loesch said.Consider, if you will, that most of these children do not have bathing suits and must be assigned one for swimming activities. Every night, St. Michaels Laundry washes 150 to 200 suits to have them ready for the next day.p. Money and supplies for NYSP have been donated by the Eli Lilly Foundation, Wells Fargo and local Sears department stores. Participants also received free physicals from Saint Joseph Regional Medical Center and Memorial Hospital.p. More than 200 colleges and universities nationwide sponsor NYSP each summer. Last year more than 75,000 youths from low-income areas in 49 states participated. Several thousand have benefited locally, mostly from the South Bend area.p. Camp runs through July 23 at Notre Dame, but, for the kids, the memories and lessons theyve learned will last through the summer and beyond.p.