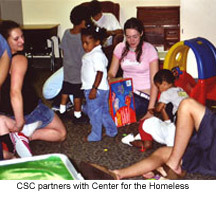 Notre Dames mission statement acknowledges an intentionto cultivate in its students not only an appreciation for the great achievements of human beings but also a disciplined sensibility to the poverty, injustice and oppression that burden the lives of so many. The aim is to create a sense of human solidarity and concern for the common good that will bear fruit as learning becomes service to justice.p. There’s nothing unusual about a university, or any other institution, encouraging its members to serve the common good. Such service is a minimal requirement of citizenship and an agreeable commonplace of American life, expressed in Lions Club car washes, Girl Scout cookie sales, community cleanups and Meals on Wheels delivery.p. While such good citizenship is highly prized at Notre Dame, the University also nudges its students toward social service because of an insight essential to its Catholic identity, an insistence that our lives are worthless unless we pour them out for one another.p. Notre Dame graduates have been finding numerous ways to serve their communities since the Universitys foundation in the mid-19th century, but postgraduate service became a more formal, and consequently more visible, institutional interest during the 1960s. Notre Dame played an indispensable role in the earliest days of the Peace Corps, when Rev. Theodore M. Hesburgh, C.S.C., then president of the University, invited the first 45 Peace Corps volunteers to train on campus before traveling to their assignments in Chile.p. The Peace Corps became a model for the Community for the International Lay Apostolate (CILA), a popular social service group which sponsored hundreds of Notre Dame students in summer service projects throughout Latin America. One of these students spent three summers in CILA, working among the poor of Mexico and Peru. While in Mexico, the student had what he described asa searing kind of experience of call, the call from God to be a priest.Responding to that call, the student was eventually ordained a priest of the Congregation of Holy Cross and is today Father Hesburghs successor as president, Rev. Edward A. Malloy, C.S.C.p. Father Malloy counts among his more pleasant official duties presiding at the annual Senior Service Sendoff in Washington Hall. This Commencement weekend event, in which some 200 Notre Dame seniors participate, honors those members of the graduating class who are embarking on a year or two of social service. During the ceremony each of the participating seniors is recognized by name and service program, and each receives a journal with favorite quotations and advice from various members of the Notre Dame community. Large maps of the United States and the world are displayed illustrating the vast geographical reach of the domestic and international programs in which the seniors have enlisted.p. Many Notre Dame graduates become involved in service and social action through the Center for Social Concerns, in whose programs and courses some 2,000 students annually participate. Since the establishment of the center in 1983, data regarding postgraduate service has been more thoroughly and reliably recorded, and a recent center report asserts that the last 15 years have seen an 80 percent increase in the numbers of Notre Dame graduates intending to work in social service programs immediately following graduation.p. Various accounts are given for this intensifying interest in postgraduate service. One undoubted factor is the campus presence of such programs as Notre Dames Alliance for Catholic Education (ACE), which recruits and trains teachers for understaffed parochial schools in dioceses across the United States; the Holy Cross Associates, which assists members of the Congregation of Holy Cross in serving the poor in six U.S. cities and Chile; and the Faith Formation Leadership Program (FFLP), established this year, in which recent graduates will live in community and pursue masters degrees while serving asapprentice parish catechetical leadersin dioceses nationwide.p. At least as important as the availability of these programs is the Center for Social Concerns itself, which not only sponsors an annual postgraduate service fair to introduce seniors to a vast network of local, national and international social service agencies and communities, but also helps them choose among service opportunities with the assistance of a senior transitions coordinator.p. Father Hesburgh once described the sort of graduate all these efforts are intended to inspire and support:One who knows and loves, one who has cherished wisdom and built character, and, above all, one who has learned to give of self.p. _Contact: Andrea Smith Shappell, senior transitions coordinator of the Center for Social Concerns, at 574-631-5779 or shappell.1@nd.edu __ _ p.