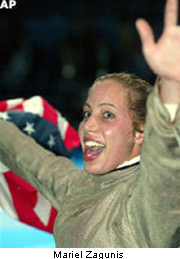 Each new Notre Dame student adds his or her own shimmer to the Golden Dome. But one young woman in this year’s incoming freshman class will actually arrive on campus with Olympic gold – 19-year old Mariel Zagunis of Beaverton, Ore., who took top honors in the Athens games, becoming the first American woman ever to win a gold medal in fencing.p. Of course, they can’t all be Olympic medalists. (At least no others have reached that goal yet.) But the Class of 2008 certainly has set a gold standard for incoming college freshmen, before even cracking a book to begin their college careers.p. “By virtually every measure, this year’s entering class is most impressive,” said Daniel Saracino, assistant provost for enrollment. “These young men and women are not only extremely bright and very involved, but they have demonstrated they can function on very little sleep!”p. Saracino is referring to the abundance of activities and accomplishments the newest crop of Domers already has to its credit, including academic honors, community service and volunteer experience, and participation in athletics and the arts.p. Academically speaking, the projected 1,990-member class, selected from a pool of 11,491 applicants, truly represents the best and the brightest, arriving on campus with an average SAT score of 1367, eight points higher than last year’s freshmen. Thirty-five percent were ranked in the top five of their graduating classes, and 73 percent will receive AP credit for advanced course work taken at the high school level.p. Continuing a trend toward a 100 percent participation rate, a full 92 percent of the incoming class was involved as high-schoolers in community service, up 8 percent over last year. In addition, 75 percent took part in varsity athletics, 39 percent were active in student government, and 52 percent participated in the performing arts.p. Other notable statistics on the incoming class: 82 percent are Catholic, 22 percent are the children of alumni, 23 percent have at least one parent who is a teacher, and the male-female ratio is 52-48 percent, respectively.p. While first-year students will not officially declare a major until they are sophomores, the bulk of this year’s freshmen, 42 percent, intend to choose disciplines within the College of Arts and Letters. Of the remaining students, 24 percent plan to enroll in the College of Science, 17 percent in the College of Engineering, 14 percent in the Mendoza College of Business, and 3 percent in Notre Dame’s School of Architecture.p. Wherever they decide to concentrate their efforts in the classroom, Saracino looks forward to the many contributions he expects the Class of ‘08 to make, both academically and otherwise.p. "I’m excited about them sharing their God-given talents with the rest of the Notre Dame community," he said.p.