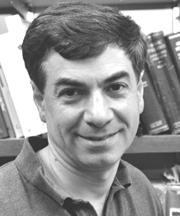 For 15 years, Shahriar Mobashery has been addressing a trend that society only now is understanding: Antibiotic resistance has become a major public health problem.p. “For the past 50 or 60 years, we’ve been able to stay one step ahead of traditional infections,”said Mobashery, a bio-organic chemist and Navari Family Professor of Life Sciences at Notre Dame. “However, in the next 10 to 20 years, all eight broad classes of antibiotics will be obsolete.”p. Among signs of this health crisis: In 2002, a strain of staphylococcus aureus called “hospital staph” became resistant to antibiotic treatment. This turn of events has been covered by the national media, often in disturbing detail.p. In early March, the American Academy of Pediatrics and the American Academy of Family Practice began recommending that doctors avoid prescribing antibiotics for ear infections in children. The groups believe that if they can reduce antibiotic use for such infections, they can stop the rise of antibiotic-resistant germs.p. The attention is warranted and welcome, according to Mobashery:p. “It is both a global societal problem and an elaborate and challenging scientific problem,” he said.p. His research team works at the genetic level and has created a synthetic molecule that wreaks havoc in healthy bacteria somewhat like the havoc bacteria wreak in us. The team now is examining ways to simplify the synthesis of this compound that binds to a very specific place on the bacteria’s protein-making machinery, called the ribosome. The goal is a new class of antibiotics.p. From the 1940s to the 1970s, several new classes of antibiotics were introduced that checked infections and saved hundreds of millions of lives. The miracles of the so-called “Golden Age of Antibiotics” led former U.S. Surgeon General William Stewart to declare in that late 1960s that it was time to “close the book on infectious diseases.”p. But the increasing use of antibiotics during the “Golden Age” gave rise to the now-resistant microorganisms. And despite how impressively antibiotics have performed, infectious diseases remain the leading cause of mortality worldwide.p. “Through a precise series of biochemical events, bacteria have ‘selected’ for drug resistance,” Mobashery said.p. A prescribed antibiotic kills a vast majority of susceptible bacteria, but one or several may survive the treatment. Since their susceptible competitors have been destroyed, the nutritional resources are essentially limitless for resistant bacteria.p. “The body provides a wonderful incubator where the resistant bacterium grows unencumbered,” Mobashery noted.p. In addition to this selective process, inappropriate use of antibiotics has increased the phenomenon of antibiotic resistance. Roughly 40 percent of children who see a doctor for a common viral cold are prescribed antibiotics, even though antibiotics are not effective for such viruses.p. Many patients, feeling better after a day or two of antibiotics, fail to follow the full course of treatment. Taking the drug when it is not appropriate or not taking it in the proscribed manner provides fertile ground for resistance.p. Mobashery noted that antibiotic resistance to staph is a particular concern.p. “Staph infection has long been a concern in hospitals,” he said. “In the last 10 years, it also has emerged as a concern in prisons and schools, where people are in close contact with one another.”p. A frightening new phenomenon is the community onset of staph infections outside of these institutions.p. “Staph is very common,” Mobashery said. “Twenty-five percent of us have it on our skin or in our body cavities at any time. If you shake hands with eight people in a given day, two have it.”p. During the 1940s and ‘50s, 90 percent of staph infections could be successfully treated with antibiotics.p. “Because of increasing antibiotic resistance, that figure is now down to 30 to 40 percent and it continues to decline,” Mobashery said.p. There are many steps that both individuals and health-care practitioners can take to slow emergence of resistant bacteria. However, there are clear clinical needs that only the discovery of novel classes of antibiotics can address, according to Mobashery.p. In their work, Mobashery and his team of researchers have found a way to disrupt the ribosome’s protein-making machinery at a key place, called the acyl transfer site, or “A Site.” Tests have shown that their molecule works exactly as they hoped. But making the molecule has been a laborious process, involving 14 tedious steps. If they can find a way to expedite the synthesis of their new compound, they will be well on their way to introducing an entirely new class of antibiotic to the public.p. Despite the efforts of Mobashery and other researchers to usher in a new golden age of antibiotics, getting their solutions into the hands of patients will be difficult. The economics of the pharmaceutical industry complicate the search for new classes of antibiotics. It takes at an estimated one-half billion dollars to bring a new drug to market.p. “It’s not lucrative for pharmaceutical companies to develop and market a new antibiotic,” Mobashery said. “It is used for only a week or 10 days at time and may earn the company hundreds of millions of dollars. In contrast, a drug that will be used continually for long periods of time, like Viagra, will earn $6 billion annually.”