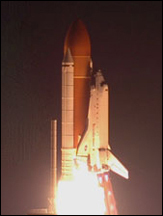 When the space shuttle Endeavour launched today it carried with it a set of experiments designed and constructed in the laboratory of Dennis Jacobs, a University of Notre Dame professor of chemistry and biochemistry who also serves as a vice president and associate provost.

The experiments are part of the Materials International Space Station Experiment (MISSE), a multi-institutional collaboration to explore how materials degrade in the low-earth orbit spacecraft environment.

The 16-day mission will be NASAs longest space station trip and will include five space walks by the crew of seven, the most ever while a shuttle is docked to a station. The Notre Dame experiments occupy a prized spot, alongside the installation of a Japanese research module and the delivery of a two-armed Canadian robot to the orbiting International Space Station.

Appropriately for a research effort from the home of the Fighting Irish, astronauts will perform a space walk on St. Patricks Day (March 17) to install the MISSE-6 experiment outside the space station, where it will fly for approximately one year. Every 20 minutes during the next year, the experiment will gather important data on a variety of materials involved in the experiment.

On a later shuttle mission, a different team of astronauts will retrieve the MISSE-6 experiment and bring it back to earth for further analysis. Jacobs and other researchers will then be able to examine closely the kind of degradation that transpired in space.

Contrary to popular belief, the low-earth orbit spacecraft environment is a hostile one where energetic atoms, ions, electrons, and radiation bombard the surfaces of a satellite,Jacobs said.Over time, these corrosive components will degrade and erode most materials.

We have devised a set of knock-out experiments that remove different portions of the flux of energetic particles that irradiate the external surfaces of a spacecraft. This will allow us to isolate how each component of the low-earth orbit environmentcontributes to the overall degradation of each material specimen. By understanding the detailed mechanistic pathway through which a variety of materials are eroded in space, we hope to guide the development of next-generation satellite materials that will be durable in space.

Jacobslaboratory research involves the study of non-thermal processes at the gas/solid interface. He previously had a one-year experiment conducted on the International Space Station in 2005-06.