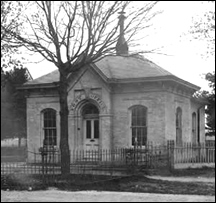 Anyone familiar with Notre Dames history knows that the Universitys founder, Rev. Edward F. Sorin, C.S.C., was a forceful, even blunt, leader who let nothing stand in the way of his vision for the institution. He wasone of those people who assume that they should be in charge and proceed accordingly,wrote Rev. James T. Connelly, C.S.C., editor ofThe Chronicles of Notre Dame du Lac.

Among the early projects on which Father Sorin took charge was the petition for aU.S.post office on the Universitys grounds – with him, of course, as postmaster.

Beyond the convenience factor, Father Sorin knew there were many other benefits associated with having a federal facility on the campus, including the opportunity to generate revenue, the inclusion of Notre Dame on all official government maps, and the assurance that roads leading to the campus would be better maintained.

Father Sorin also saw a chance to improve morale and spread the name of his fledgling school.The sight of the mail coach sweeping up to the door each day,he said,will add dignity and attract attention to the University.

Given Notre Dames proximity toSouth Bend,U.S.postal officials said there was no need for a separate office on campus and rejected Father Sorins request in early 1850. Accustomed to getting his way, the French priest then turned to Henry Clay, the well known and respected U.S. Senator fromKentucky, for assistance. How or why Father Sorin and Clay knew each other is a mystery, but the extra clout proved effective, and a post office was officially established at Notre Dame onJan. 6, 1851. Father Sorin was appointed postmaster, a position he held until his death in 1893.

The post office was a modest operation in its first year of existence. There was no separate building and postal receipts amounted to just $36.02, according to an article published by the Northern Indiana Philatelic Society. Business gradually grew, however, and the University first post office building – a small, brick structure – was constructed in 1856 on the east side ofNotre Dame Avenuenear the current site of theLawSchool.

The Universitys second post office building, at twice the size of the first, was constructed of yellow brick on the same site in 1914. It was in service for 20 years, during which time more than 200,000 pounds of published material alone were processed annually, a postal business equal to a city of 12,000 people.

The third postal facility again doubled the size of the previous when it was openedNov. 16, 1934, on a site just south of Walsh Hall adjacent to the present-day Coleman-Morse building. Designed to blend with other campus architecture, the building now serves as home to the Notre Dame chapter of the Knights of Columbus.

From 1967 to the present, the Universitys postal services have been operated in a 4,973-square-foot building onNotre Dame Avenue, just south of where the first two post office facilities stood, a location more accessible to the general public.

The new building onHoly Cross Driveis about the same size as the previous facility, but has numerous conveniences, such as a 24-hour lobby, and is even more accessible to the greater community, including 12 parking spaces.

All thats missing is a designated space for the horse-drawn coach to comesweeping up to the door each day.