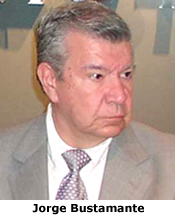 Jorge A. Bustamante, Eugene Conley Professor of Sociology at the University of Notre Dame, has been named the 2007 recipient of the American Sociological Associations Cox-Johnson-Frazier Award.

Bustamante will be formally recognized by his peers in August at the associations annual meeting inNew York. The Notre Dame Department of Sociology will also host a reception in his honor at the conference.

One of the most prestigious professional honors in sociology, the award is given annually either to a sociologist for a lifetime of research, teaching, and service to the community or to an academic institution for its work in assisting the development of scholarly efforts in this tradition. The Cox-Johnson-Frazier award honors the intellectual traditions and contributions of Oliver Cox, Charles S. Johnson and E. Franklin Frazier.

Jorge truly exemplifies the spirit of this award from the ASA,Daniel J. Myers, chair of sociology at Notre Dame, said.He has been an absolutely tireless champion for the human rights of immigrants all over the world.His combination of prolific scholarship and informed policy advocacy has brought him the respect of governments, non-governmental organizations, individuals and the academy.

Bustamante, a native ofTijuanawho earned his doctoral degree from Notre Dame in 1975, has been a member of the Universitys faculty since 1986. The author of numerous studies on Mexican-origin residents of theUnited Statesand the sociology of the border region, he has played a major role in building and sustaining scholarly links between the two countries. Bustamante is the president and founder of El Colegio de la Frontera Norte, the prominent Mexican institute for the study of border issues.

Bustamante was nominated in 2006 byMexicos Congress for the Nobel Peace Prize for his advocacy of human and labor rights for immigrants. His more than 200 scholarly publications were recognized in 1998 when he received the Premio Nacional de Ciencias, the highest award granted to scientists by the Mexican government.