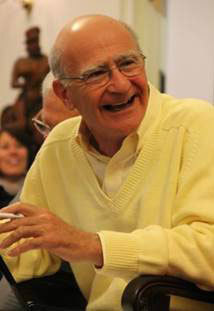 Sidney Tarrow, Emeritus Maxwell M. Upson Professor of Government at Cornell University, will deliver the 21st annual Hesburgh Lecture in Ethics and Public Policy at 4 p.m. April 30 (Thursday) in the Hesburgh Center for International Studies Auditorium at the University of Notre Dame. The Hesburgh Lecture, sponsored by the Kroc Institute for International Peace Studies, is free and open to the public.

Tarrow’s lecture, “Seeking Peace in Wartime; Opposing War in Peacetime,” will explore the effects of recent wars — the Ukrainian war, the violent outcome of the Arab Spring, the Islamic State takeover of parts of Iraq and Syria — on the U.S. peace movement.

Since Sept. 11, 2001, the United States has been fighting in conflicts during a time that legally is a time of peace. For the U.S. peace movement, this has had contradictory effects. Tarrow’s lecture will explore these contradictions and propose a path for those who seek to advance the cause of peace today.

“His enduring focus on grassroots movements for social change, peace and justice is inspiring and instructive to those in the scholarly and peacebuilding communities.”

Tarrow’s most recent books, which focus on social movements and contentious politics, include “War, States, and Contention: A Comparative Historical Study” and “The Language of Contention.” He is a fellow of the American Academy of Arts and Sciences.

The Kroc Institute established the Hesburgh lectures in 1995 in honor of the Rev. Theodore M. Hesburgh, C.S.C., president emeritus of Notre Dame, a global champion of peace and justice and the founder of the Kroc Institute. Each year a distinguished scholar, policymaker and/or peace advocate is invited by the Kroc Institute director to deliver a major lecture on an issue related to ethics and public policy in the context of peace and justice. Past Hesburgh Lecturers have included Amartya Sen, 1998 winner of the Nobel Prize in economics; Francis Deng, special adviser to the U.N. Secretary-General on the Prevention of Genocide and Mass Atrocities; and former U.S. Rep. Lee Hamilton, former vice-chair of the National Commission on Terrorist Attacks and former chairman/ranking member of the House Committee on Foreign Affairs.