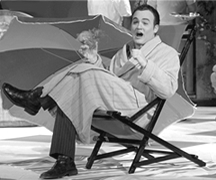 _EDITOR’S NOTE: In honor of Irish President Mary McAleese, Nicholas Tonozzi will sing the national anthem of Ireland at the University’s 2006 Commencement exercises May 21. He will be accompanied on the piano by Larry Dwyer, assistant director of bands.
_

The verdict is in: Nicholas Tonozzi is a bit of a devil.

This may be true of quite a few graduating Notre Dame seniors. But as the music departments reigning tenor, Tonozzi has had one foot in heaven and one foot in hell in a way few other students have accomplished.

This spring, Tonozzi played Pluto, the host of Hades, in the Opera Notre Dame production ofOrpheus Goes to Hell.My, but he looked at home.

After it was over,he said,my mother hugged me and whispered in my ear, Do you feel as typecast as I think you feel?

He added, gleefully: I most definitely am a youngest childI like to be the center of attention.

His presence on stage is considered commanding. Up close, hes more like an energy force waiting to be harnessed. His eyebrows exhibit more expression than mostHollywoodidols can muster in an entire film.

Though a devil on stage, Sunday mornings have found Tonozzi in the choir loft of Sacred Heart Basilica, where as a member of the Folk Choir for four years, he sang for the11:45 a.m.Mass, often soloing. Rev. George Rozum, C.S.C., rector of Alumni Hall, said that Tonozzi often appeared at the halls 10 p.m. Sunday night Mass, playing the cello and singing the responsorial songs.

Hes very conscientious, well-liked, and a great R.A.,Father Rozum adds, revealing another side of Tonozzi. R.A.s, undergraduate members of a halls staff, provide support for the residents.

Hes the type of person that people seek out,Buedert says.

Tonozzis voice is, Buedert says,a magnificent instrument,and it next will be in the hands ofNorthwesternUniversity, which has given him a full scholarship for further his vocal studies.

Buedert credits Tonozzi for his grace in making his way both through preparation forOrpheusand his subsequent April 23 senior recital, in which he sang pieces in four languages.

Cellist Karen Buranskas, associate professor of music, knew of Tonozzis interest in the cello, but quickly ceded hopes that he would be her student. She recalls that in his freshman year, Tonozzi was cast as the lead in the campus production of the operaThe Happy Prince.

As for the work in the Folk Choir,That is something just for me,says Tonozzi.It helps keep me focused and sane. I think its important to be in a Catholic activity at a Catholic university and I think Folk Choir embodies the Catholic spirit in a way few other groups on campus do.

The Folk Choirs director, Steve Warner, said:Sometimes people who have a huge talent move in different circles than the Folk Choir. What Ive always appreciated about Nick is that hes kept his spiritual life in focus, and thats fleshed out in his participation in our ensemble.

This summer, Tonozzi will be appearing as a teller at his hometown bank, where customers who know his voice from church services often press him for impromptu performances.

He recognizes a professional performance career, if successful, would conflict with his personal goal:I want to have a bazillion children. That means five.He sees himself in law school in the distant future, preparing for a career that could support a brood.

Just when you think you couldnt have met a straighter arrow, Tonozzi comments on the opportunity for finding women who also want large families.

I was dating someone last year. She wanted to have a very large family. Oddly enough, shes decided to be a nun.

An eyebrow arches, a finger wags:After me, I guess, theres just God.