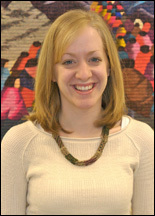 Andrea Laidman, a University of Notre Dame senior from Alden, N.Y., has been named a 2008-09 George J. Mitchell Scholar.

The prestigious Mitchell scholarships are awarded annually to 12 Americans, under the age of 30, to pursue a year of post-graduate study at any university in Ireland. The awards are named after former Senate Majority Leader George Mitchell, who spearheaded the historic Good Friday Agreement of 1998.

The Mitchell program recognizes outstanding young Americans who exhibit the highest standards of academic excellence, leadership and community service. The program seeks to link future American leaders with Ireland. The 12 new Mitchell scholars were selected after a rigorous application process that drew more than 300 applicants from 130 schools.

Laidman will graduate in the spring with a major in political science and international peace studies. She is the co-founder and director of Notre Dame Against State Killing, an organization created to inspire dialogue about the death penalty. Her leadership in this area earned her the Howard R. Swearer Student Humanitarian Award, a national award given annually to five students in the country, as well as the Richard J. Wood Student Community Commitment Award, given to one student in the state of Indiana for exemplary service, leadership and advocacy.

Laidman is a weekly columnist for Notre Dames student newspaper, The Observer, and worked as a legal research intern for the Irish Department of Justice.