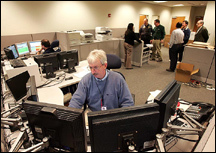 The University of Notre Dame Security/Police Department (NDSP) moved today (Jan. 4) to a new building on Holy Cross Drive next to the Stepan Center. The three-story, 40,000-square-foot facility also will house the Notre Dame Post Office, which will be relocated this weekend and will open for business Monday (Jan. 10).

In ceremonies this afternoon, NDSP officers lowered the flag at the departments former headquarters on Dorr Road and processed in a parade of police vehicles to the new building for roll call and raising of the flag.

Named Hammes Mowbray Hall, the new facility was underwritten with a gift from Jerry and Dorene Hammes of South Bend, Ind.; their nephew, Jerry Hammes Mowbray of Reno, Nev.; and their son, Jeffrey Hammes of Kankakee, Ill.

“The generosity of the Hammes family is legendary on our campus and now extends to three generations of philanthropic support,” said Rev. Edward A. Malloy, C.S.C., Notre Dames president. “We are humbled by and appreciative of their continuing contributions to the University.”

Jerry Hammesparents, Romy and Dorothy Hammes of Kankakee, underwrote the construction of the Hammes Notre Dame Bookstore on the Universitys South Quad in 1955. When the bookstore was moved to new quarters in the Eck Center in 1999 it retained the Hammes name.

Jerry has been a member of the advisory council for University Libraries since 1976.

The Hammes family also has been a significant benefactor of the Indiana Province of the Congregation of Holy Cross, Notre Dames founding religious community, through its “Sign of Hope” and “Living Faith” fund-raising campaigns. The family was a major benefactor in the renovation of the Sacred Heart Parish Center at Notre Dame. Jerry received the Rev. Howard J. Kenna, C.S.C., Award in 1999 for service to the congregation and University.

Jerry Hammes is president of Romy Hammes Inc. of South Bend and chairman of Peoples Bank of Kankakee County. He is a member of the class of 1953.

Jeffrey Hammes, a 1992 graduate of Notre Dame, is president and chief executive officer of Peoples Bank.

Jerry Hammes Mowbray, who was graduated from Notre Dame in 1975 and earned his law degree from the University three years later, is an attorney in Reno. Through a previous gift he established a fellowship at the Law School in the names of his parents, the late Justice John C. Mowbray and Kathlyn Hammes Mowbray of Las Vegas. Justice Mowbray was a 1949 Notre Dame graduate and Kathlyn Mowbray is the daughter of Romy and Dorothy Hammes.

Hammes Mowbray Hall will provide additional space for each of its tenants. The post office, which will occupy half of the first floor, will gain three new enclosed loading docks. The rest of the building houses offices and training space for NDSP.

Work on the $10.97 million project began in 2002 but was put on hold during a building moratorium in 2003. The Moake-Park Group of Fort Wayne, Ind., designed the building and Ziolkowski Construction of South Bend was construction manager.

The new building paves the way for future construction in the areas of the campus where NDSP and post office were located.