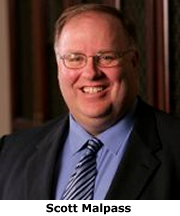 To understand the world of Scott Malpass, vice president and chief investment officer, know this first: You might not want to ask him for a stock tip, but if you need the advice of someone who can judge character, he’s your man.

Malpassexpertise is judging whether professionals are honest people who are good at finding deals, rather than personally making thebuy low, sell highdecisions for the hundreds of investments that constitute Notre Dames $5.5 billion portfolio. He oversees the 17 th largest higher education endowment in the countrythe largest among Catholic colleges. It also is among the highest performing endowment funds in the nation over the past 15 years.

Those investments include real estate, such as a choice piece overlooking Chicagos Michigan Avenue; utilities and energy projects, to name a few. His world is internationalhes just returning fromChina, which he sayswill be one of  the greatest opportunities in our history.(Hes keen onVietnam, too, as well asLatin America)

A variety of decision-making imperatives have made Malpass one of the most respected higher education investors in the country.

First is to pick allies wisely.Its all people,he says. Notre Dame has 154 partners, among them, Sequoia Capital and fourBostonfirms that helped the University into the venture capital business as early as 1980. But his team is always on the lookout for new partners; they may review or interview as many as 300 new firms every year.

Our fundamental job is to go out there and find investment partnersa lot of time is spent trying to get to know people; doing due diligence,says Malpass, who gives high praise to the 26 members of his staff.Its having the judgment to discern whats market return and whats value added above that.One key is deciding whose judgment is consistently good and who has just experienced a few lucky breaks.

Also important, Malpassteam has to understand the rapid changes of the investment marketone reason why he and his team constantly traveland adapt to new investment strategies as they become viable. Uncovering new opportunities in international markets was one of the strategies that helped the Universitys investments stabilize and return to strong growth after the dot.com bust earlier this decade, he says.

Change has been on Malpassagenda since he arrived at Notre Dame in 1988 as a 26-year-old. He had a Notre Dame bachelors degree, a masters of business administration and three years of Wall Street experience.

He also had a strong investment committee of Board of Trustees membershe mentions former committee head Robert Wilmouth and current head Jay Jordanwho were watching his back and helping him usher in a modernized University investment operation. When he began, the endowment contributed 3 percent of the annual operating budget. Today it is 20 percent and, as is the case with the nations top universities, it is recognized as providing what he callsthe lifeblood.

Investment amateurs have long been counseled: Buy what you know and like.

Its considerably more complicated for Malpass, but the framework of that advice is evident as he talks fondly about some of the Universitys stronger investments.I think Google was a particularly attractive investment, not just because it did so well, but it gives us the ability to get information in any discipline. Its an unbelievable learning tool.

He also loves the idea that Notre Dame investments have supported the innovations of University researchers.

If part of your investment is in your people, Malpass has a novel way of getting to know them. For years, he has taught investment to undergraduatesits a credential that helps them get placed in great jobs. Many also go on to study law and earn their MBAs. And many, including Mike Donovan, managing director of private capital investments, and assistant directors Tim Dolezal and Rick Buhrman, come back to Notre Dame to apply those skills. Dolezal and Buhrman are former Malpass students. Mike Cook, head of real estate investments, and Bill James, head of energy and commodities investments, round out the main investment team.

Malpass calls his staff memberstrue patriotsfor their dedication to advancing Notre Dame. For Malpass, love of Notre Dame is a personal investment. Diversions include golf, politics, and Notre Dame committees on the future of Catholic education and Catholic identity.