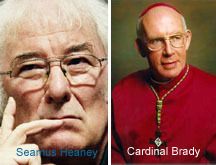 The University of Notre Dame will honor the Irish poet Seamus Heaney and Cardinal Sean Brady, archbishop of Armagh, during a Sunday (May 25) celebration in Dublin, Ireland, of the 10th anniversary of the establishment of its Keough-Naughton Centre there.

Heaney, Irelands foremost poet, and Cardinal Brady, the spiritual leader of Irelands Catholics, will receive honorary doctoral degrees from Notre Dame at a ceremony in the Public Theatre of Trinity College Dublin.Following the conferral of degrees, Heaney will read from his poetry.

Heaney, who received the 1995 Nobel Prize in literature, has published numerous and wide rangingbooks of poetry, prose, translations and essays. He visited Notre Dame for a poetry reading in 1995, shortly after receiving the Nobel Prize, and again in 2003.

Cardinal Brady, who was installed as archbishop of Armagh in 1996, was made a cardinal in November.His episcopal ministry extends to Catholics on both sides of the Irish border, and he played a prominent and influential role in Northern Irelands peace process.

The honorary degree ceremony will be preceded by a Mass of thanksgiving in the Trinity Chapel of Trinity College.Notre Dames president, Rev. John I. Jenkins, C.S.C., will preside and sacred music will be provided by the Notre Dame Folk Choir.

Established in 1998, the Keough-Naughton Centre is based at O’Connell House, a late 18th century building on Merrion Square.The program enables Notre Dames Irish studies minors and other undergraduates to study in Ireland.Participating students take classes with Notre Dame faculty in the Centre as well as courses at University College Dublin, Trinity College Dublin and the Irelands National College of Art and Design.

The institute and centre are named in honor of Notre Dame Trustees and benefactors Donald Keough and Martin Naughton for their support of Irish studies at Notre Dame.