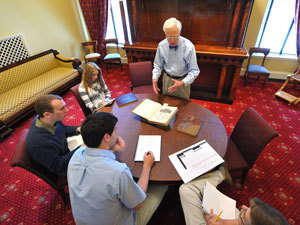 The University of Notre Dame’s School of Architecture will convene a colloquium Oct. 10 (Monday) honoring the 40-year career of a faculty member who helped it become the nation’s foremost institution for the study of classical and traditional architecture.

The colloquium, Classical Architecture: Explore, Build, Teach, will concern the work of architecture professor Thomas Gordon Smith, who served as chair of the School of Architecture at Notre Dame from 1989 to 1998.

Classical and traditional architecture had been fading to near negligibility from the curricula of most architectural schools when Smith began his tenure. “When I arrived at Notre Dame, I was given two mandates,” he recalled. “First, I had permission to transform the architecture school’s approach into a classical one. The provost then, Tim O’Meara, pointed out that this unusual direction would be the first time in 50 years that an American architecture program utilized ancient and Renaissance models for teaching building design.”

Smith said that the second mandate, from Notre Dame’s then president, Rev. Edward Malloy, C.S.C., “was to change the education of the students in ways that would produce leaders in the field of architecture. I am proud that the trajectory of these dual facets continues to develop, with the help of many colleagues, alumni and the deans who succeeded me, to provide an alternative to the stultifying modernism still taught in most schools. Notre Dame students are taught to aspire to the Vitruvian precept of designing buildings that are durable, functional and beautiful. Many of our alumni are now engaged in leadership roles in architectural firms and schools throughout the United States and in various other countries.”

A few years into Smith’s chairmanship, an article in The New York Times described a resurgence of classicism in American architecture, calling Smith and his Notre Dame colleague Duncan Stroik “Young Turks” of a stylistic revolution and Notre Dame “the Athens of the new movement.”

In addition to his academic work, Smith has been a practicing architect since 1980. His projects include a new church, parish hall and education building for St. Joseph Catholic Church in Dalton, Georgia; a new seminary near Lincoln, Nebraska; a new Benedictine monastery near Tulsa, Oklahoma; the renovation of two churches, and master plans for churches in Michigan and Texas. He has designed residences in California, Illinois, North Carolina, Indiana and Wisconsin, and his public projects include the Cathedral City Civic Center in California, a visitor’s center for the Lanier Mansion Historic Site in Indiana and the Bond Hall of Architecture at Notre Dame.

The colloquium also will feature an exhibition in the gallery of the Bond Hall of Architecture featuring watercolor renderings and photographs of buildings completed by Smith over his years of professional architectural work. The colloquium and exhibition are open to the public.