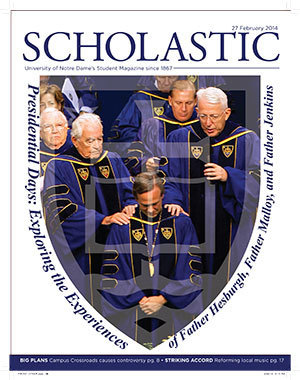 Two University of Notre Dame student publications have won top honors from the Indiana Collegiate Press Association. Scholastic was named 2014 Newsmagazine of the Year, and The Dome shared the Division I Yearbook of the Year award with Indiana University.

Scholastic won 27 awards in news, sports, feature and opinion writing, and design, photography and illustration. The publication, which appears monthly, began as a weekly newspaper and has been published continuously since 1867. The editor was senior Julia Steiner of Louisville, Ky.

The 2013 Dome was honored for its photography, cover design, senior portrait section and coverage of sports and student organizations. The Dome was first published in 1906. The 2013 edition was edited by Christopher Milazzo, who is now a law student at Cornell University.

Both Notre Dame publications are sponsored by the Office of Student Affairs. The Indiana Collegiate Press Association is made up of 45 student newspapers, magazines, yearbooks and online publications from throughout Indiana. The awards were presented at ICPA’s annual convention, held April 4-5 at IUPUI in Indianapolis.