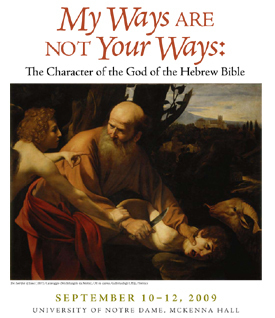 The Hebrew Bible contains many passages that describe God as loving, merciful, and good. It also contains passages that seem to portray God as commanding genocide, the slaughter of innocent children, and other atrocities. Critics of Abrahamic religious traditions contend that these darker passages undermine the traditional Jewish and Christian understanding of God as perfectly loving and good.

Scholars will address these contentions—and the ensuing charge that Abrahamic religions should be rejected—at a conference titled “My Ways Are Not Your Ways: The Character of the God of the Hebrew Bible,” to be held Thursday to Saturday (Sept. 10 to 12) at the University of Notre Dame.

“The objection to Christianity that constitutes the topic of the conference is among the most challenging objections to traditional Christian belief under discussion in the contemporary literature,” said Michael Rea, professor of philosophy and director of Notre Dame’s Center for Philosophy of Religion. “The objection is particularly challenging because its force can be immediately appreciated by anyone, regardless of his or her philosophical or theological background.”

Prior to this conference, few philosophers or theologians have formally responded to these objections to Christianity, Rea said, noting that the topic is interdisciplinary by nature and that dealing with it competently requires philosophical acumen, literary sensitivity, and an awareness of recent developments in Biblical studies.

The Center for Philosophy of Religion will host the conference which, according to Rea, intersects with the center’s mission to stimulate and conduct cutting-edge research on important issues in Christian philosophy and with its goal to promote more fruitful dialogue between theologians and philosophers of religion. Conference commentators and presenters will include prominent Biblical scholars and philosophers—both theistic and nontheistic.

This scholarly event also can capture the interest of a broader audience, regardless of academic background or focus, Rea noted.

“The papers for the conference, as well as the replies by commentators, are much more widely accessible and engaging than typical academic papers, and the topic is of direct relevance to the life of faith of individual believers,” he said. “The command (in Deuteronomy 21) to ‘annihilate the Hittites and Amorites,’ not ‘letting anything that breathes remain alive’ is something we struggle with, and it is exciting to see some of the very best minds in philosophy and theology coming together to discuss what we should think of the idea that divine revelation includes such commands.”

The papers, remarks, and reactions from the conference will be collected in a volume tentatively titled “Divine Evil? The Moral Character of the God of Abraham,” and scheduled to be published by Oxford University Press in 2010.

For more information or to register for this conference, click here.