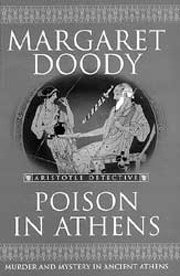 Novelist and professor Margaret A. Doody of the University of Notre Dame has authored the fourth book in her international best-sellingAristotlemystery series.p. Poison in Athens,published recently in the United Kingdom by Random House, continues the story of Aristotle as a detective who, together with his student, Stephanos, unravels the details of yet another murder in Athens.p. The series has been wildly popular in Italy and England, and also has been published in France, Spain and Brazil.Poison in Athensalso is expected to be translated shortly into Greek and Turkish.p. Other titles in the series includeAristotle Detective,(1978),Aristotle and Poetic Justice(2002) andAristotle and the Secrets of Life(2003).p. An Oxford-trained scholar of 18th-century literature, Doody has been a member of Notre Dames faculty since 2000. She is the director of the Universitys Ph.D. in Literature Program and the John and Barbara Glynn Family Professor of Literature.p.