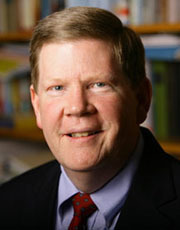 Schmuhl is writing a book titled"Easter 1916 and America: The Irish Rebellion and the ‘Exiled Children.’"He will spend four months at UCD researching Irish-America’s concern with Irish independence, the news reporting of and reaction to events as they unfolded, the impact of events after the Easter Rising and long term consequences of 1916 for Irish-U.S. involvement.

Schmuhl will work with a core group of scholars concerned with the history of the rising, Irish independence and the formation of the Irish state.He also will take part in the post-graduate seminar program of the John Hume Institute for Global Irish Studies, participate in a research project titled"Through a Looking Glass: Conflicting and Complementary Representations of Ireland and America,"and contribute to the institute’s public lecture program.

A member of the Notre Dame faculty since 1980, Schmuhl is the director of the University’s John W. Gallivan Program in Journalism, Ethics&Democracy.He is the author or editor of 10 books, including"Statecraft and Stagecraft: American Political Life in the Age of Personality,""Demanding Democracy,""Thomas Jefferson: America’s Philosopher-King,"and"Wounded Titans: American Presidents and the Perils of Power.

John Hume received the Notre Dame Award in 1996 and was a co-recipient of the 1998 Nobel Peace Prize for his efforts to bring about lasting peace in Northern Ireland.